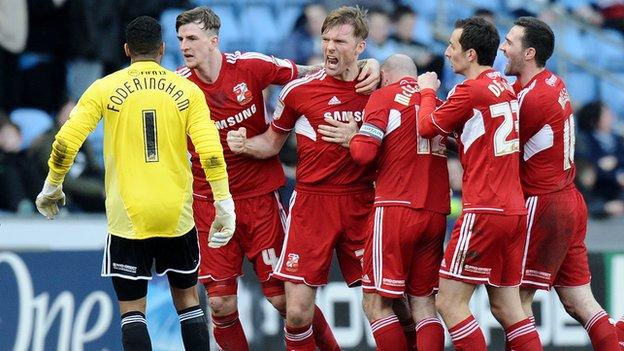 Franck Moussa opened the scoring for Coventry after just 64 seconds, firing low into the bottom corner.

Swindon dominated the rest of the game, only to waste chances, Andy Williams going closest when he hit the post.

Despite the tonic of earning their third straight away win at Bournemouth in midweek, managerless Coventry's fourth straight home defeat now leaves them seven points adrift of the play-offs.

Swindon's last visit to Coventry was in their Premiership days, when they drew 1-1 at Highfield Road in January 1994, Andy Mutch scoring in the last minute to cancel out Roy Wegerle's opener for the home side.

On a day when the top three all won, Swindon's first victory in three games leaves them still in third, two points behind second-placed Sheffield United.

But they had only themselves to blame for leaving it so late, Williams missing a hat-trick of first-half chances.

The 10-goal striker, Swindon's second top scorer, dragged the ball into the side netting when one-on-one on the half-hour mark before hitting the post from an identical situation seven minutes later and then seeing his follow-up effort tipped over the crossbar.

Only brave blocks from Coventry pair Nathan Cameron and Aaron Martin kept Swindon out until four minutes from time when substitute Adam Rooney struck the post after following up his own shot from 10 yards, only for Williams to pounce on the loose ball.

And Ward then climbed to head home to earn all three points for MacDonald, appointed as successor to Paolo Di Canio on Thursday.

"In too many areas we were second best. Unfortunately we just didn't have enough today.

"But it's still disappointing the way we've conceded the goals. The amount of games where we're 1-0 up and just need a bit of mental strength to see it through.

"There are a lot of good games to go, a lot of twists and turns to come. But it's important we sort out our home form. It's something we're desperate to put right."

"It was a great performance and probably deserved in the end.

"I'm delighted and I thought they played some very good football at times.

"The way the players reacted was a testimony to how [caretaker-managers] Tommy Miller and Darren Ward had done for them. I thought the two of them were outstanding, as the whole team were.

"I thought the winning goal was fantastic for Darren. I think it released a lot of pressure that he'd been under."