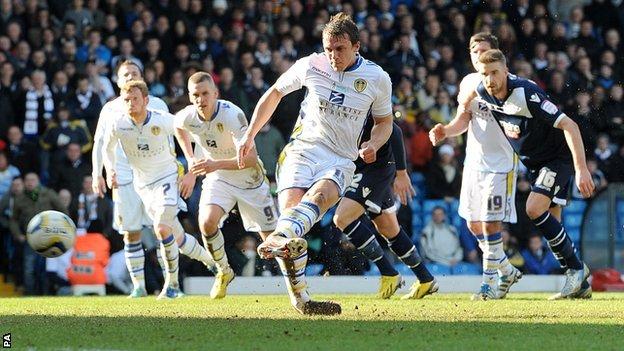 Leeds enhanced their Championship play-off hopes as a Stephen Warnock penalty gave them victory over Millwall.

The visitors had gone close early on when James Henry's shot hit the post before Leeds striker Ross McCormack had a penalty saved by David Forde.

But when McCormack was fouled by Alan Dunne in the second half, Warnock took the spot-kick and made no mistake.

"It wasn't a pretty or spectacular game, but it was a great win for Leeds which moves them closer to the play-offs. Can they use this as a springboard? I think that's damaged Millwall's top six hopes quite significantly."

Millwall thought they should also have had a penalty for a Sam Byram handball but their appeals were waved away.

The visitors were furious at the decision as their outside chances of a play-off spot became even slimmer.

The victory was Leeds' eighth in their last nine league games at Elland Road, although the day ended on a sour note when forward Luke Varney was carried off on a stretcher in injury time.

The home side had survived an early scare when Millwall midfielder Henry was put clean through by a flick from winger Martyn Woolford, only to strike his effort against the post.

Woolford had also pushed a couple of efforts of his own wide by then, but Leeds soon responded, Varney heading wide before former Leeds loanee Shane Lowry's mistimed sliding tackle on Byram after 28 minutes gave McCormack the chance to open the scoring from the spot.

But after referee Mike Jones stopped the Scot taking the penalty to order a re-spot, his effort low to Lions keeper David Forde's left was saved.

Leeds then saw a David Norris cross missed by Forde and come back off the post, the loose ball cleared off the line by defender Danny Shittu.

McCormack also had a close-range shot saved before the striker was brought down by Dunne to give former Liverpool and Aston Villa full-back Warnock the chance to score his first goal for the club.

"It was all about getting three points. It was a must-win game before going away to Leicester and Crystal Palace and we deserved it, though we could have made it easier for ourselves."

"I didn't want Ross to take the second penalty and put extra pressure on himself after missing the first.

"I was going to send El-Hadji Diouf on to take it but Stephen wanted to take it straightaway and he told me he'd taken them before."

"My first impressions are that we couldn't complain about either of Leeds' penalties.

"But I felt we had a clear-cut penalty when Danny Shittu headed the ball down, Sam Byram had his hand by the side of his body and clearly handled it as the ball was going through to my centre-forward, so I thought the referee got that call wrong.

"David Forde made a good save from the first penalty and he is in top form at present. We had big chances but Paddy Kenny pulled off two very good saves for them and Shane Lowry hooked one over from about seven yards, so we were unfortunate to come away with nothing."