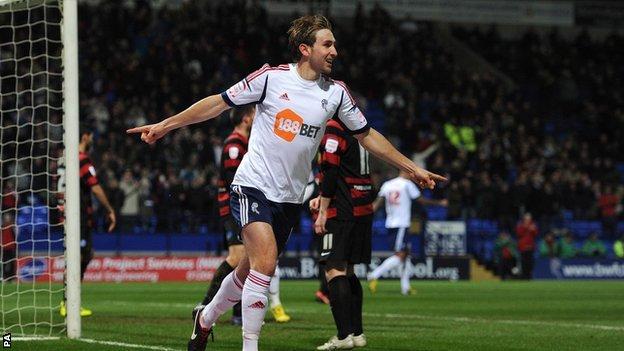 David Ngog opened the scoring for the visitors with a volley and Jay Spearing made it 2-0 from 25 yards out.

Within 90 seconds of the restart, the Tykes were back in it thanks to Tomasz Cywka's curler and they were level when Chris O'Grady scored from close range.

However centre-back Dawson slammed home just before the hour-mark to make it six games unbeaten for Bolton.

The win keeps alive their slim play-off hopes, sitting seven points off the top six, while Barnsley are only one point above Peterborough and the relegation zone.

Bolton scored with their first chance when Chris Eagles took advantage of poor defending to tee up Ngog, who fired home from 12 yards out.

Eagles and former Barnsley striker Craig Davies curled shots just off target before Bolton took control of the game when Spearing fired home after the Tykes failed to clear the ball properly.

However they had hope when Cywka scored early in the second half from O'Grady's ball. And six minutes later they were level when Ryan Tunnicliffe found O'Grady, who slotted home from six yards out.

However just another six minutes on and Bolton were ahead again, Luke Steele spilling Marcos Alonso's free-kick to Dawson, who smashed the rebound in.

Barnsley had further chances to level again but Jim O'Brien, Jacob Mellis and Jason Scotland all failed to convert opportunities.

"I don't really do interesting games, I do wins. We've got to win football matches and we didn't do enough first half to win that football match.

"We waited, we delayed, we were on our back foot and to win a football match, to win a fight, you've got to be on your front foot. You've got to be throwing the punches, instead of taking them and first half we took too many punches.

"In the second half, we were on the front foot. We showed guile, we showed bravery and we took a Bolton team on that couldn't cope with that dominance and we've only dominated them for 45 minutes."

"I felt in the first half we went into a deserved lead, played some fantastic football, created more than a few opportunities and had a deserved 2-0 lead. But credit Barnsley; they came out, they changed their shape, we didn't react quick enough, they got a couple of goals back.

"But I just felt that gave us a little bit more determination to go and get another goal at the other end, and we did that.