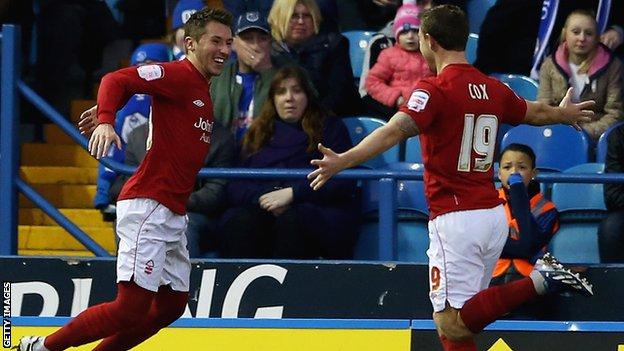 Majewski struck in the first half, his fifth goal in three games a simple finish after a fine run by Simon Cox.

The win ought to have been more comfortable as Cox, Majewski and Dexter Blackstock all had chances to extend the lead.

A lacklustre Wednesday are four points above the relegation zone.

The all-important goal came in the 27th minute when Cox went on a jinking run, taking advantage of some non-existent defending before squaring for Majewski to slide home into an empty net.

Majewski could have doubled the lead but dragged his shot wide from 16 yards while Blackstock could not make proper contact with a header from Cox's cross.

Wednesday thought they had won a penalty when the ball appeared to strike substitute Jamaal Lascelles on the arm in the second half.

But referee Michael Oliver was not persuaded, much to the frustration of the home crowd.

Wednesday manager Dave Jones on the referee's decision to not give a penalty:

"I'm confused because I was talking to the assessor before the game.

"One, I don't know why we have a Premier League referee and secondly the assessor told me that if the ball changes direction then it's a penalty.

"He gave a handball when it hits a guy's arm from a yard away, then their lad lifts his arm and the ball moves and he didn't give it. That's the little bit of a break that we wanted. But the referee has to spot one of them."

"In the first 45 minutes our play was outstanding, we should have been more than one goal in front.

"In the second half we knew we would have to change our game but in the end that was a very good win.

"Their tails were up, they have been on a good run, coming here you know what you get. In the second half we showed a different type of game. This was a man's test because they are a strong side."