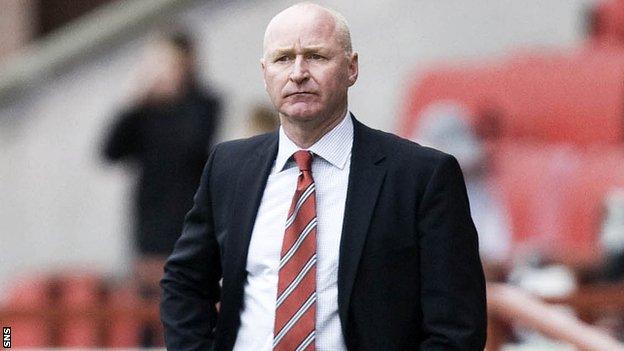 John Brown has been named Dundee interim manager to the season's end.

The 51-year-old spent four years as a player at Dens Park in the mid-1980s and is replacing Barry Smith.

Brown was on the coaching staff at another of his former clubs Rangers before managing Clyde in Division One but he was sacked in November 2009.

"Having been inundated by high-calibre candidates, one man stood out as perfect for the position," said a Dundee statement.

"John Brown is a man with real heritage and history at Dundee and, when at Dens Park in his time as a player, he was an real inspiration, a fans favourite and scored some vital goals and he has never lost his feelings for the club.

"Having met with members of the board this week, his passion for Dundee was instantly evident.

"And his willingness to step up to the plate for the remainder of the season - alongside his immediate understanding of what we as a club need from the position - convinced us he is the man to address the challenges ahead of us this season."

The statement added that Dundee would seek to appoint a permanent manager once they had clarity over both their own league position and also where any league reconstruction would place the club.

"There is still a lot to play for this season, with some vital games coming up," continued the statement.

"The club will continue to assess and review the longer-term situation but, due to the mixed challenges of our current league position and uncertainties over league reconstruction, it is impossible for us to set a budget for next season and coming years.

"Hopefully that position will become clearer very soon and we will then look to appoint a manager in a full-time, longer-term position."