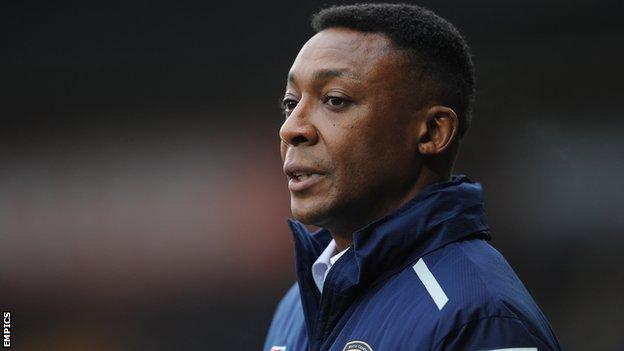 League One side Notts County have named Chris Kiwomya as their manager for the remainder of the season.

The 43-year-old took control of first-team affairs earlier this month following the departure of Keith Curle.

Kiwomya oversaw four games as caretaker manager and picked up his first win against Bury on Friday night.

"We think Chris deserves the chance to build on the work he has done in the short space of time that he has been in charge," said club chairman Ray Trew.

Having only been beaten once in his temporary spell in charge, County are eight points of the play-off places.

Trew told the club website: "Chris has shown his desire and enthusiasm for the job and coupled this with a tactical astuteness that has allowed him to turn things around when they haven't been going exactly as we would have liked.

"We will, of course, review the situation at the end of the season. But Chris now has the chance to show us exactly what he can do, in the knowledge that he has an extended spell in charge."