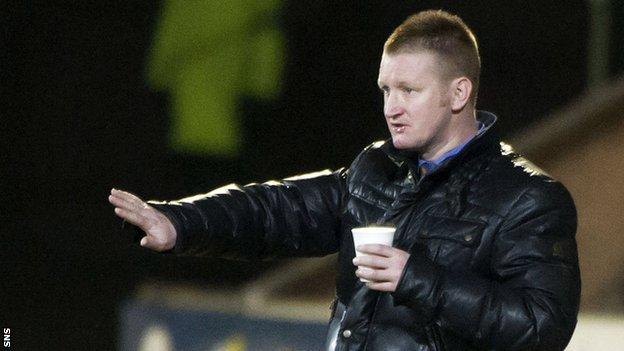 Steve Lomas believes the trip to Tayside rivals Dundee in midweek will be vital for his St Johnstone team as they push for a European place.

Saturday's 1-0 home win over St Mirren lifts the Perth side to fourth in the Scottish Premier League, one place away from a Europa League slot.

"The next three games are critical," said the Northern Irishman.

"Dundee have just taken on a manager so that will pervade a difficult obstacle."

Saints follow the match at Dens with a trip to Hearts, then a home game against Kilmarnock.

I don't know who is doing the fixtures at the SFA; it must be Stevie Wonder.

"It's a local derby," added Lomas of the match against the Dark Blues, who have appointed former defender John Brown as interim manager following the sacking of Barry Smith.

"Hopefully we'll get a couple of players back. Chris Millar is not far away and Dave Mackay was on the bench. We didn't want to take the risk with him. Tom Scobbie missed out today and Murray [Davidson] came back in.

"Hopefully we're just getting them fit at the right time."

The win over St Mirren was deserved but not a match that the fans will enthuse about.

"We didn't care how we won," admitted Lomas afterwords. "It was just get the points by hook or by crook.

"We knew it would be a tough game. We have been away at Ross County on a very heavy pitch [last Saturday], then we had a tough game against Celtic [on Tuesday] and then again today, so a lot of the boys have had three tough games in a week.

"It was going to be very tough. We've had this ridiculous situation where we had six games in 23 games and then three weeks off.

"I don't know who is doing the fixtures at the SFA; it must be Stevie Wonder.

"The first goal is always critical and we got it.

"Obviously then St Mirren had to come out and expose themselves a bit more and take a few more risks and it opened up and allowed us to hit them on the counter."

As St Johnstone bid for another foray into continental competition, Lomas revealed he has asked some of his players to increase their goal tally.

"We set the boys a challenge to get into double figures," he said.

"It could have been easier had it not been for the woodwork and Craig Samson."