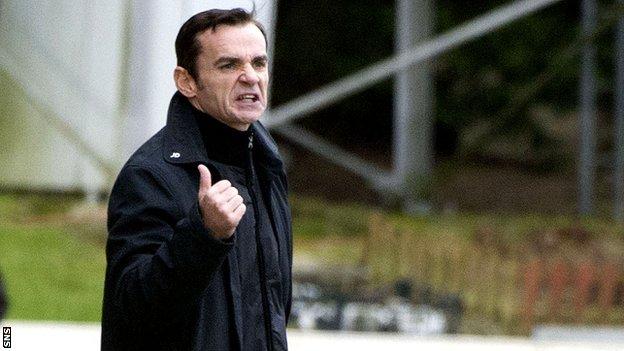 St Mirren may have a cup final date on 17 March but, for manager Danny Lennon, defeat at St Johnstone was the first of five prior to the Hampden occasion.

The Buddies lie in 11th place, eight points behind sixth-placed Kilmarnock, albeit with a game in hand.

"We need to start picking up wins fast if we want to fuel our ambitions," said Lennon of his team's top-six hopes.

"It's still in our hands. Prior to our cup final, we had five finals starting today. That's one out of the road."

St Mirren now have SPL matches against Hearts, Dundee and Dundee United and a Scottish Cup sixth-round match against Celtic to look forward to before the Scottish Communities League Cup final.

After a tight, scrappy match, the Buddies boss was feeling a little sore to be leaving Perth with nothing to show for his team's efforts.

"I thought the first half we handled them very well," he said.

"The pitch wasn't conducive to the way we want to play. That's two games out of the last three that we have been playing on very difficult pitches, and it goes against our beliefs but we have to be intelligent and adapt to it.

"What was disappointing was the manner we conceded a goal.

"That's five games in a row that we haven't conceded in open play. To lose it in that way, particularly after the first-half defensive display, was disappointing.

"We didn't handle it and that is the difference between us walking away with no points or one point today.

"We then tweaked one or two wee things to chase the game and they kept hitting us on the break."

While dejected at the defeat, Lennon feels he knows where things are going wrong for his team as he looks ahead to Wednesday's home match against 10th-placed Hearts.

He continued: "We had a lot to do with our own downfall, in terms of overdoing it in particular areas.

"That's two games in a row where we haven't managed to score. We have failed to bring our best in front of goal.

"The quality coming in from wider areas hasn't been the same since [Gary] Teale went out.

"He trained fine yesterday. He feels OK side-footing it in training but it's striking through it [that's the problem].

"Wednesday might be too soon for him but it's important we get him right because he has been an important player for us.

"I'm delighted that the games are coming thick and fast now for us. The full squad will be utilised."