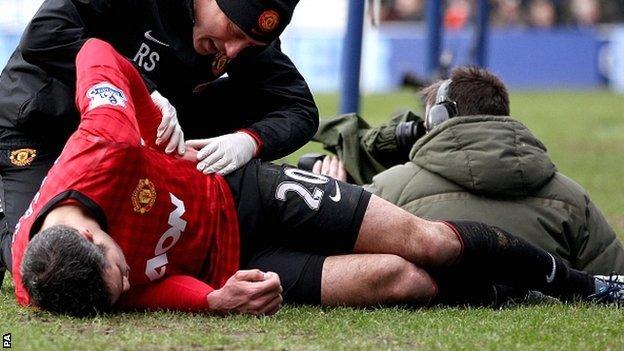 Van Persie fell down a camera bunker as he helped set up Rafael's opener, before being replaced after 40 minutes.

"We will assess him tomorrow. Hopefully he'll be all right for the Real Madrid game [on 5 March]," said Ferguson.

"He tried to play on but it was obvious he wasn't going to make it."

And it left a feeling of relief for Ferguson, who played an experienced side against bottom-of-the-table Rangers.

"It was a great result for us. It's another game away, so it's important," the Scot told BBC Sport. "It was one of these games where the pitch was lively, the ground was tight.

"There wasn't a great deal of football in the first half; it was a display from us which was more about determination, concentration and defending and we got through it.

"Rafael's goal was fantastic, it was probably goal of the month at a time when we just starting to get into it a little bit. Robin also had a great run and strike but the keeper saved it.

"You have to get that second goal, and at that time with 12 minutes to go, it was vital. Ryan Giggs has a great record of scoring here over the years and he's delivered again for us, he's an amazing man."

Ferguson, who is aiming for his 13th Premier League title after missing out to Manchester City last season, said his side's togetherness was superb with just 11 games to go.

"Hopefully we are doing the right thing. If we win our next game it looks after itself and you eventually run out of games," he added.

"What is obvious is that the spirit of the team is fantastic. No matter which team I'm playing, they are all playing for the same cause. There is great camaraderie among them. The dressing room is buzzing - I have no issues at all in terms of their form, their spirit and their determination, it's really good."