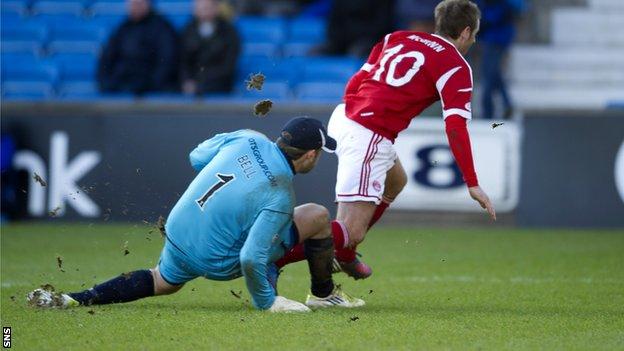 Aberdeen manager Craig Brown felt his side were extremely hard done by after being denied a second-half penalty against Kilmarnock at Rugby Park.

"It's an inexplicable error of the referee who's, in my opinion, a good referee," Brown told BBC Scotland.

"The keeper lost possession, McGinn knocked it past him and was brought down on his way to get the ball."

And Brown added: "I think the other officials looked a bit embarrassed.

"When I was remonstrating with the fourth official and the assistant on that side, they didn't say anything, but you could tell that they had nothing to say, there was no justification.

"I'm beside the whole Kilmarnock bench and every one of them looked, shrugged their shoulders and they all agreed it was a penalty.

"I feel quite aggrieved, particularly as a couple of weeks ago Mark Reynolds was sent off for an unintentional, not a deliberate handball.

"So I don't know why but we seem to be at the rough end of some decisions."

Aberdeen bombarded the Kilmarnock goal in the first half and took an early lead thanks to a well-taken half volley from Rory Fallon.

However, they spurned a number of other chances and McGinn was also denied by the post after an impressive, jinking run.

Killie gradually worked their way back into the game and Paul Heffernan's 11th goal of the season came just before the break.

"We've been like that quite a lot this season where we've had most of the game and failed to take our chances," Brown said.

"We didn't get the vital decision in the match so we've got to just grin and bear it I'm afraid.

"In fact we still have aspirations to be top two or three and a decision like that could have huge implications for Aberdeen Football Club."