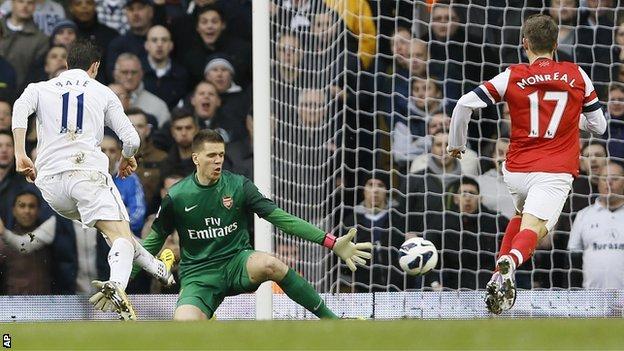 Tottenham won a pulsating north London derby to go third in the league and seven points ahead of Arsenal.

It was Bale's ninth goal in seven games but Per Mertesacker's header went in off the Welshman to give Arsenal hope.

Entertainment and goals are almost guaranteed between these two sides and there was no shortage of either in an enthralling contest at White Hart Lane.

Tottenham's failure to take a number of glorious chances to wrap up the game as Arsenal desperately chased an equaliser only added to the drama.

But the home side held on after enduring six minutes of added time to go 12 league games unbeaten and, in the process, leapfrog Chelsea as well as move two points behind second-placed Manchester City.

The wizardry of Spurs winger Bale has swept all before him this year and he was again on the scoresheet as he took his tally to 20 goals for the season.

"Arsenal played well in the second half but it is a huge win for Tottenham and it was the man of the moment in Gareth Bale who helped them to victory."

The Gunners paid the price for a serious lapse of concentration towards the end of the first half, with their determined efforts after the break not enough to retrieve the situation.

Arsenal's next game will see them try to overturn a 3-1 first leg deficit in a last-16 Champions League tie at Bayern Munich and, if they do go out, the loss at Spurs leaves them five points from a top four spot and struggling to qualify for Europe's top competition.

There had been a huge sense of anticipation around the game and that transformed itself into an intensity and urgency on the pitch in the fevered atmosphere of a game between these rivals.

In the frenetic opening skirmishes, the Gunners almost picked their way through when Santi Cazorla's incisive pass released Olivier Giroud, whose shot was blocked by the sliding recovery tackle of Jan Vertonghen.

Arsenal were tigerish and tenacious but the promise of their attacks was continually snuffed out by the excellent Tottenham centre-backs Vertonghen and Michael Dawson.

They produced the resilience and awareness the visitors could have done with from their defence, who were twice caught out to give Spurs the upper hand.

Gylfi Sigurdsson and Scott Parker each played incisive passes from the left through the heart of Arsenal's defence for Bale and Lennon to score.

Bale sent a 38th-minute left-foot shot into the bottom corner before Lennon rounded Wojciech Szczesny and slotted in his fourth goal of the campaign.

Spurs had led 1-0 and 2-0 against their rivals in their past two meetings but ended up losing both 5-2 and Arsenal threatened another comeback when Mertesacker's glanced header from Theo Walcott's free-kick skimmed in off Bale's head.

Spurs keeper Hugo Lloris crucially gathered a low Carl Jenkinson cross as Giroud and Aaron Ramsey threatened to pounce before Spurs took back a grip on the fluctuating game.

Bale blazed over a Benoit Assou-Ekotto cross from the left before Sigurdsson was clean through only to square the ball for Mertesacker to clear instead of shooting.

The visitors were exposed as they piled forward and Defoe sent a shot agonisingly wide as the home side again failed to put Arsenal away.

Spurs were almost punished when Ramsey angled an effort wide, while Walcott curled a 22-yard free-kick the wrong side of the post towards the end.

Tottenham will feel they are strongly placed for a top four spot but there will also be a note of caution after they let a 10 point lead over Arsenal slip last season.