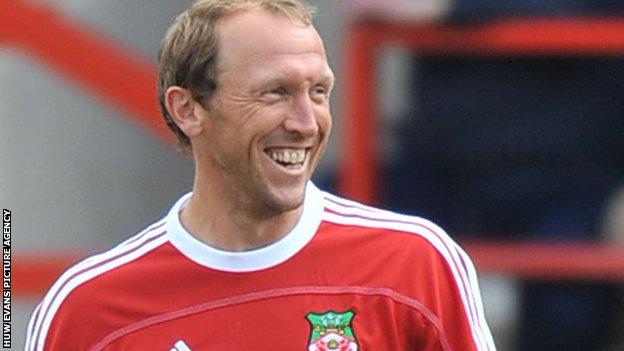 Wrexham player-manager Andy Morrell wants his side to take inspiration from York City as he targets a historic league and cup double.

League leaders Wrexham reached the Trophy final on Saturday with a semi-final victory over Gainsborough.

And Morrell said: "York did the double last year so there's no reason why we can't do it this year."

A comfortable passage to Wembley looked in prospect for Wrexham when Danny Wright's early goal in the semi-final second leg opened a 4-1 aggregate lead.

But Gainsborough, who play in a division below in the Blue Square Bet North, staged a stirring comeback on their own ground. They came within one goal of taking the tie into extra time after Terry Hawkridge and Michael Leary had cut Wrexham's lead.

The visitors need a goalline clearance from Joe Clarke in the sixth-minute of added time to secure their first Wembley visit in the club's long history.

"We knew they were going to throw everything at us," said Morrell, who saw his side's 13-match unbeaten run end with the 2-1 defeat.

"I thought getting the first goal would be key and I thought we were going to be comfortable after we got it.

"That wasn't to be, they scored and it changed the game in their favour. The first goal wasn't a throw in and the second was a foul on Wrighty [Stephen Wright], but that aside, we're through to Wembley and that's what we've got to look forward to."

While York's promotion came through the play-offs, Morrell wants his team to go up to League Two as Conference champions.

He gave his players "10 minutes" to "enjoy" getting past Gainsborough before turning their attention to Tuesday's league visit to Barrow, who are desperate for points to climb out of the relegation zone.

"The league is the priority so we've got to try to stay up the top," said 36-year-old Morrell.

"We're still top after this weekend and it's on to Tuesday and to Barrow away - there's a comedown for you.

"It'll be a very similar challenge to Gainsborough and we've got to be bang at it to get anything from it."

Wrexham will be the fourth Welsh club to play in a Wembley final in the space of 13 months.

It ends a long wait for Wales' oldest club to reach a showpiece final at the home of English football.

"It's quality. We can see with the fans what it means for them," added Morrell.

"It's the first time for the club at Wembley and I'm proud as punch. I'm looking forward to it, it's not every day you get to go to Wembley."