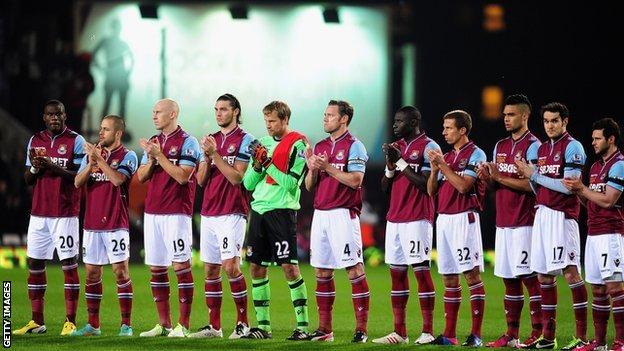 Bobby Moore's grandchildren led the teams out before West Ham played Tottenham to mark the 20th anniversary of the death of the Hammers legend.

Fans and players from both clubs provided a minute's applause while home supporters held aloft cards making up a mosaic reading "Moore 6".

West Ham produced a tribute programme with 50p from each sale going to the Bobby Moore Fund for cancer research.

"He was our England World Cup-winning captain, but also more personally for all of us here at West Ham, a legend at our club and always will be," said Gold.

"It was great to see so many West Ham fans turn out in what was bitterly cold weather. But they wanted to pay their respects to a man we hold very dear at this club."

Football Association chairman David Bernstein has expressed regret that the governing body did not do more to honour the former defender, who won 108 caps for his country.

Bernstein wrote in a Sunday Times column: "I am aware the Football Association has been criticised over its treatment of Bobby once he retired from football.

"It saddens me that this is the case and while I am not privy to exactly what happened at the time, it is clear to me the organisation could have done more."

However, the FA chief is proud of the work the organisation has done recently to commemorate Moore and help the charities associated with the player who also won the FA Cup and European Cup Winners' Cup.

"During my time as Wembley Stadium chairman I was immensely proud that we were able to commission the outstanding statue of Bobby, which was unveiled before the official stadium opening in 2007," said Bernstein.

"If Bobby were alive today I am sure we would have asked him to be the chief ambassador for the Football Association in its 150th year. Equally, I have no doubt he would be extremely modest - if not embarrassed - about his achievements and the legacy he has provided for every English football fan.

"Over more recent years the FA has worked very closely with the Bobby Moore Fund for Cancer Research UK, also now in its 20th anniversary year.

"We will continue to work with Bobby's charity and its campaign this coming year, at England home matches and at the FA Cup semi-finals and final."

Bernstein believes it is also fitting that Sunday's Capital One Cup final between Swansea and Bradford was played on the anniversary of Moore's death outside the ground where his statue sits.

"Of course the great man would appreciate the significance of such a London derby and I hope the teams can emulate the skill, athleticism, grace and respect for which we all remember Bobby Moore so fondly."