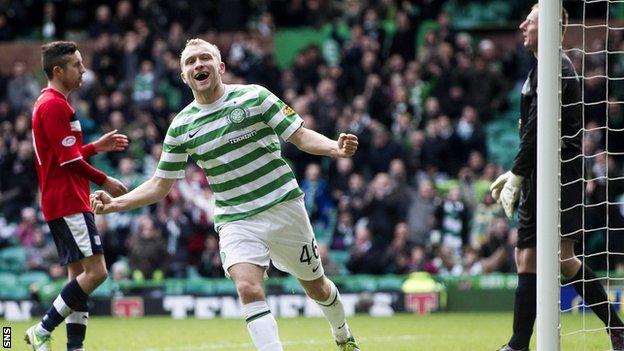 "I thought we were sloppy in the first half," he said. "We created some decent openings but we lacked fluency and defensively we looked a little ragged.

"But the second half was much better. We needed to up the urgency and there was a much greater sharpness about us.

Skipper Joe Ledley pounced on a mistake from Dundee goalkeeper Rab Douglas to knock in the opener, while James Forrest added a second-half penalty following Matt Lockwood's dismissal for a foul on Gary Hooper.

Dylan McGeouch then steered in a header as the depleted visitors began to wilt.

Ledley hammered in his second goal from 10 yards and Gary Hooper completed the scoring with a lovely volleyed finish.

"Obviously we got the penalty and the sending off, but I thought our attitude was a lot better after the break," added Lennon on BBC Radio Scotland as his team moved 21 points clear at the top of the Scottish Premier League.

"We scored some very good goals and I'm delighted about that.

McGeouch was given a start as Lennon made five changes to his starting line-up and the young midfielder capped a fine display with a goal, while recent signing Tom Rogic was given some game time in the second half.

"I'm pleased for Dylan," said Lennon. "That's two really good games he's put in for us and he scored a great goal.

"It's always good to get a few goals, the sun was shining, hinting at the first signs of spring and I'm pleased with the way we are playing at the moment."