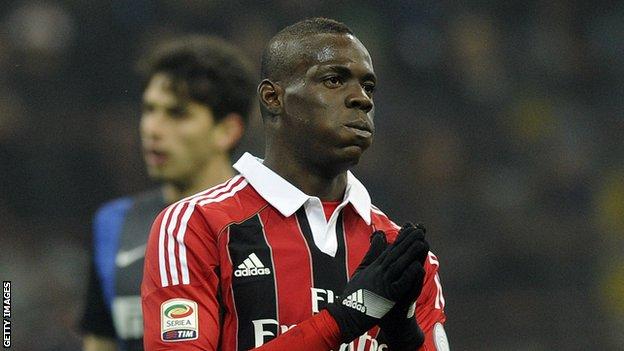 Mario Balotelli was frustrated by his former side as AC Milan were held to a 1-1 draw by rivals Inter.

Stephan El Shaarawy curled home the opener as Milan dominated the first half.

Inter improved after the break and substitute Ezequiel Schelotto ensured they took a point with a powerful header.

The draw means Milan remain third in Serie A, six points behind Napoli, while Inter climb one place to fifth.

All eyes were understandably on Balotelli as the AC Milan striker faced the team for whom he made more than 50 appearances between 2006 and 2010.

But it was El Shaarawy, arguably the stand-out performer in Milan's 2-0 Champions League win against Barcelona in midweek, who lit up the San Siro with a fine opener in the 20th minute.

Kevin-Prince Boateng picked out El Shaarawy with a smart pass that pierced the Inter defence and the Italy international superbly controlled the ball before curling a shot with the outside of his boot into the back of the net.

Milan were firmly in control and only superb saves by Handanovic prevented Balotelli from getting his name on the scoresheet and extending the lead.

First, Handanovic showed great athleticism to deny the former Manchester City striker's header from El Shaarawy's corner, then the Slovenian dived at full stretch to push away a dipping Balotelli free kick and prevent Milan from increasing their lead before half time.

However, the Milan who had dominated for long periods in the first half failed to materialise in the second and instead it was Inter who came out strongly.

They came close to equalising just before the hour when Freddy Guarin stabbed Rodrigo Palacio's whipped cross towards goal but Christian Abbiati kept out the ball at full stretch.

Just as Milan looked to be regaining control, Inter equalised, with Schelotto - who had only been on the pitch a matter of minutes - heading in Yuto Natomo's deep cross.

Palacio's header moments later had Abbiati scrambling, while at the other end of the pitch Sulley Muntari sent a looping shot wide.

Palacio went close again with another header in the closing stages before the referee called time, ensuring the Derby della Madonnina ended in a rare draw.