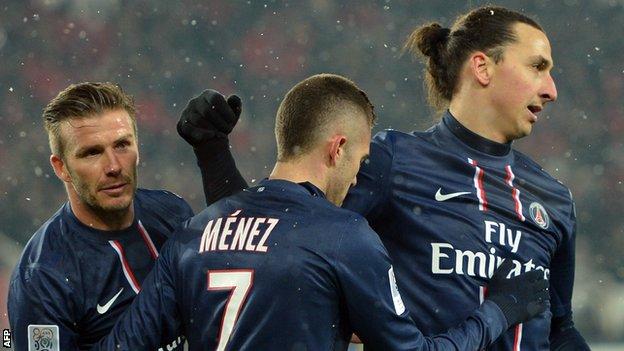 David Beckham made his long-awaited debut for Paris St-Germain as the French league leaders produced a gritty performance to see off bitter rivals Marseille and stay on course for their first title since 1994.

The former England captain was thrown on with 16 minutes of the match remaining and had a hand in his team's second goal, as PSG reestablished a three-point lead at the top of Ligue 1.

The result was cruel on Marseille, who dictated for long periods having fallen behind early on when Nicolas N'Koulou deflected Lucas Moura's shot beyond his own goalkeeper.

PSG at a glance

But Beckham's late cameo stole the show, his pass leading to the cross from which Zlatan Ibrahimovic poked in from close range, and consigned Joey Barton to the losing side.

The pre-match fireworks did not disappoint, in fact they were everywhere you looked.

The Marseille team coach arrived under the protection of no fewer than six riots vans, sirens blazing. The mutual dislike between the clubs' supporters is such that only 400 away fans were allowed to travel to Parc des Princes, housed under a temporary roof in the away end.

Then there was Beckham, of course. No substitute has ever been given quite so much attention by the world's paparazzi during a warm-up and before kick-off the former England captain was given the freedom of the stadium to lap up the adulation PSG has been waiting almost a month to show him.

The drama on the field did not disappoint either. Ezequiel Lavezzi thundered a fierce left-foot drive against the post for the hosts inside 70 seconds and PSG were ahead eight minutes later, although the goal owed more to good fortune than good football.

Moura's 20-yard shot appeared to present no threat, but after deflections off Barton and N'Koulou, who was eventually credited with an own goal, the ball crept agonisingly beyond Marseille goalkeeper Steve Mandanda.

The French broadcasters cut to Beckham in time to see his celebratory fist-pump, much to the delight of the home support.

PSG might have doubled their lead with 10 minutes of the half remaining, only for Lavezzi to place his final pass just behind Ibrahimovic, allowing Marseille to recover, when the Sweden international should have had the goal at his mercy.

Marseille stood firm, however. With Barton driving them on from a deep-lying midfield role and Mathieu Valbuena providing the invention and creativity in the final third, the home side's 1-0 lead felt vulnerable.

Jeremy Morel headed over before Foued Kadir drew a finger-tip save from Paris goalkeeper Salvatore Sirigu. Andre-Pierre Gignac went close twice before the interval but PSG weathered the storm and the cold to take their lead into the break.

The pattern continued in the second half as Marseille came with wave after wave of attack. First Valbuena went close, then Gignac saw a low shot brilliantly turned around the post by Sirigu. PSG's long-range raids were growing in frequency, however.

By the time Beckham joined the action, PSG were scrambling to cling on.

The former England captain's reassurance at the heart of midfield calmed things down and when he broke forward in time added on and played in Jeremy Menez with a flick of that famous right boot, the result was an Ibrahimovic goal that ultimately ended Marseille's brave fight.