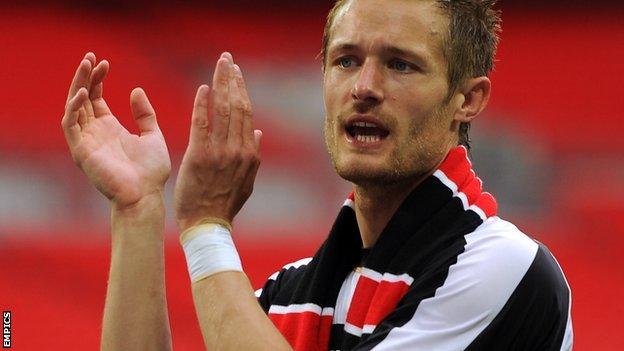 Grimsby Town defender Ian Miller says the club's focus remains on getting promoted to the Football League after they reached the FA Trophy final.

The Mariners drew 0-0 with Dartford on Saturday to record a 3-0 aggregate victory and set up a final against fellow promotion chasers Wrexham.

Miller was part of the Darlington side that won the competition in 2011.

"It is massively important that this doesn't detract from the league," he told BBC Radio Humberside.

"The bigger prize for us is to get into the Football League.

"We'll enjoy this achievement but we have already turned our focus towards Ebbsfleet on Tuesday."

Miller's side are currently fourth in Blue Square Bet Premier, three points behind leaders Wrexham with one game in hand.

They will be looking to get their promotion push back on track on Tuesday after falling to a disappointing defeat at Braintree in their last league outing.