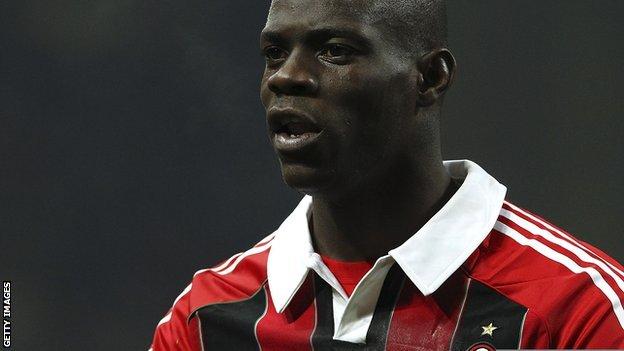 Inter Milan have been fined 50,000 euros after their fans were found guilty of racially abusing former Inter striker Mario Balotelli.

Balotelli was playing for his new club AC Milan in Sunday's derby draw.

Inflatable bananas were waved by Inter fans but some observers questioned whether they were aimed at the striker, who spent four years with the club.

The 22-year-old Italian international, who joined Milan in January, raised a finger to his lips during Sunday's match at the San Siro in an apparent attempt to stop the abuse from the Inter fans.

But Serie A's disciplinary commissioner deemed he had gesticulated to the opposition supporters and a fine was imposed.

The fine given to Inter was not solely for the abuse aimed at Balotelli. It was also for the racist abuse towards Milan's Sulley Muntari, another former Inter player, as well as for offensive banners and lasers aimed by fans at the eyes of the players.

Serie A officials issued a statement which said the abuse started "in the 11th minute of the first half" and continued "in the 11th, 15th, 16th and 19th minutes of the second half".

Sunday's incident is the latest to plague Italian football.

In January, Italian fourth division side Pro Patria were ordered to play one match behind closed doors as punishment for racist chanting towards AC Milan's Kevin-Prince Boateng, who walked off the pitch and was followed by the rest of the players as the friendly was abandoned.

Earlier this month, Inter were fined 15,000 euros (£12,900) after some of their supporters chanted racist abuse about former Manchester City striker Balotelli during a match against Chievo.