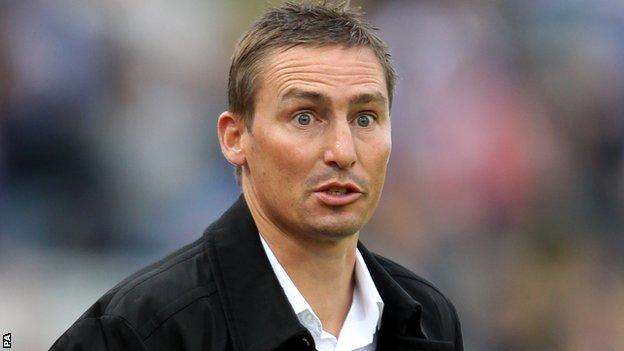 New Aldershot boss Andy Scott has been pleased with the way his players have handled the swift change in management.

Scott replaced Dean Holdsworth on Friday, and beat Fleetwood 2-0 in his first game in charge, meaning the Shots now have seven points from their last three games.

"It's been a tough week for the players with three games, and three terrific results," he told BBC Surrey.

"So the credit has got to go to them, they have given their all."

We tried to give them a positive attitude, and wanted to get them to express themselves and give themselves a bit of freedom

He continued: "Mentally they don't know who's coming in [as manager], which is stressful and tiring.

"So we tried to give them a positive attitude, and wanted to get them to express themselves and give themselves a bit of freedom.

"We could have scored four or five goals so I've certainly got nothing to complain about today."

Former Brentford and Rotherham boss Scott came in just two days after Holdsworth was sacked, with the club 20th in League Two - the same position as when he took over in January 2011.

And while Saturday's victory at the Recreation Ground did nothing to improve their league placing, striker Danny Hylton believes that Scott's methods could prove useful as his side fight to save themselves from relegation.

"We only met him on Friday after training so he's not changed too much," Hylton, who scored both goals against Fleetwood, said.

"But he made sure all the boys were working hard and we were in people's faces.

"If we do that then people can't play against us, and it showed out there, as they couldn't play."