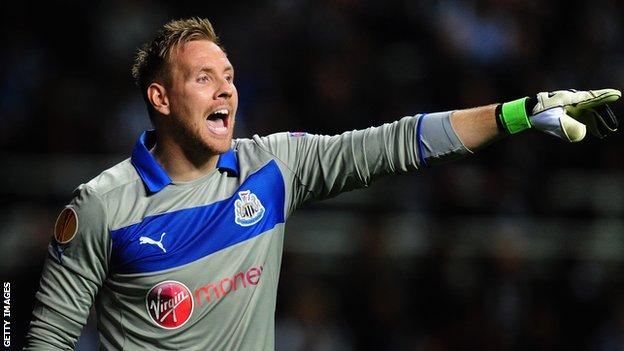 The 26-year-old arrived in August 2011, but his previous six appearances were all in cup competitions.

"It's obviously a dream since I was a kid, you always dream to play in the Premier League," he told BBC Newcastle.

Who is Rob Elliot?

"It was a dream come true to play at St James' Park for Newcastle and to finish off with a win is magnificent."

Prior to his move to Tyneside, Elliot had established himself as first-choice at the Charlton, where he worked under current Magpies manager Alan Pardew, after time on loan at Accrington and Notts County.

The former Republic of Ireland Under-19 international was given his chance against Southampton because of first-choice Tim Krul's ankle injury, but his first act was to pick the ball out of the net after Morgan Schneiderlin scored in the opening stages.

"I didn't enjoy it after three and a half minutes, but that's the Premier League for you," added Elliot.

"I think the big thing is getting around the pressure of it. The good and the top players deal with the pressure and are not afraid to keep trying the pass when fans are on your back.

"I've always been strong mentally and I think you deal with the pressure and try to enjoy it.

"As a keeper you always want to make saves, but you get judged on your mistakes, not on your saves. It's great to make some saves, and I'm a good shot-stopper, but it's more the crosses and the kicking that you want to get right."