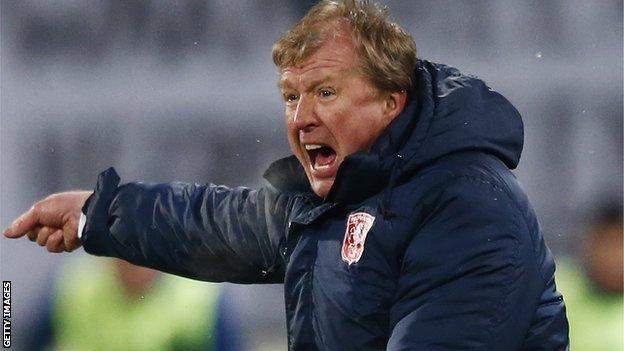 Former England manager Steve McClaren has left his role as coach of FC Twente the day after holding talks with chairman Joop Munsterman.

The Enschede side have not won a league match since 21 December and are fifth in the Dutch league, six points behind leaders PSV Eindhoven.

McClaren said: "We have agreed it's in the best interest of the club I leave.

"I leave a proud man. It has brought me one of the greatest days in my career when winning the title in 2010."

McClaren, 51, joined Twente after being sacked as England manager in November 2007 following the national side's failure to qualify for Euro 2008.

He led the club to their maiden Dutch top-flight title in 2009-2010 during his first stint with the club and he returned to Twente after spells at German side Wolfsburg and Nottingham Forest.

However, McClaren struggled in his latest stint, with Twente having not won a league match since 21 December and Saturday's defeat by Heerenveen being the sixth game without a win.

"We talked about how we could change the situation and relieve the pressure on the team which has clearly affected its performance," said McClaren.

"Unfortunately, Saturday's result has seen further adverse reactions and, with two home games coming up, we feel the team needs the support and backing from the supporters.

"I also needed assurances about my position now and in the future, which I appreciate in the present situation is difficult. After much discussion and deliberation, those assurances weren't forthcoming."

Munsterman said the decision to leave was McClaren's and he was disappointed to see the Englishman go.

"We believe that the disappointing performance of FC Twente under Steve McClaren could be reversed," the chairman said in a statement on the club's website.

"Steve has however indicated that it is in the interest of everyone to leave the club immediately.

"We understand his decision and respect it. It is disappointing to say goodbye to the trainer under whose leadership FC Twente won the league title in 2010."