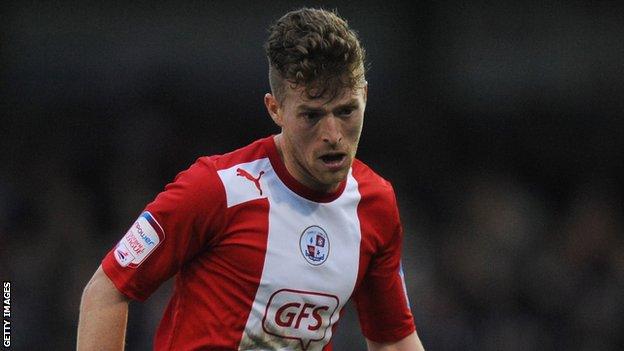 Crawley Town striker Billy Clarke has dismissed any suggestion that the play-offs are out of reach for his side.

After the 1-0 win at Leyton Orient, in which Clarke scored the winner, the Red Devils lie 12 points off the play-offs.

"If we don't think we can [get into the play-offs] we may as well pack it in now and be happy to finish mid-table," he told BBC Sussex.

"I'm not one to chuck in the towel and we're all the same. We'll try our best to get into the play-offs."

The 26-year-old was playing with Blackpool when a run of six wins out of their last eight games helped them into the Championship play-offs, in which they ultimately achieved promotion to the Premier League for the first time.

And Clarke says if his current side could emulate the Tangerines' run that season then the play-offs at the end of this term could become a reality.

"So you never know what could happen."

Clarke's strike on Saturday, which caused assistant manager Anthony Williams to label the forward as "fantastic", saw Crawley end a run of four league games without a win.

And the former Republic of Ireland Under-21 international believes the Red Devils have not been getting the rewards their performances have deserved.

"Our performances in the last few games have been very good, but we have been lacking the result," Clarke added.

"I wouldn't say it was the prettiest performance from us, but we ground it out."