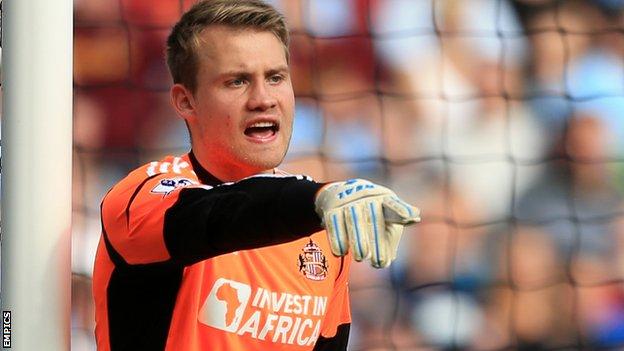 Sunderland keeper Simon Mignolet has spoken of his pride after being named the 2012 North East Football Writers' Association's player of the year.

"If you see the previous winners who won this award they are all big names therefore I'm very proud to be in that list now," he told BBC Newcastle.

"It's huge recognition and I'm very proud to be here."

Mignolet moved to the Stadium of Light from Sint Truidense for an undisclosed fee in the summer of 2010, signing a five-year deal.

The 12-times capped Belgian international featured in 45 games for the Wearsiders over the course of 2012, keeping 17 clean sheets.

"I won best goalkeeper of the year when I was in Belgium but this one is higher recognition because if you see the players you fight up against every single day, and you get recognition, I'm very pleased," he added.

"It started of the first day of 2012 when I came back from injury and we won the game against Manchester City at home, kept a clean sheet and from there onwards it all went really quickly.

"I think this year has been a really good year for me but I'm only 24."