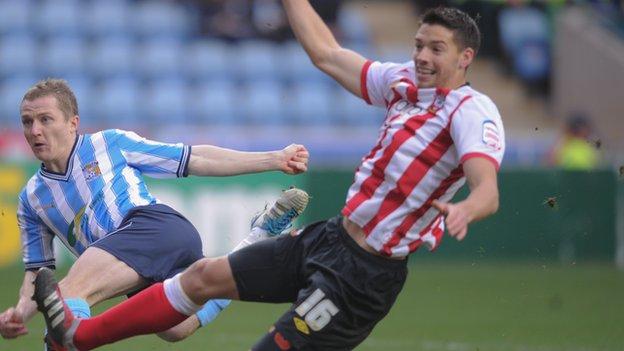 Coventry City have signed centre-half Aaron Martin on loan from Southampton for the rest of the season.

The 23-year-old, who played five games on loan at Crystal Palace at the start of this season, has been brought in to cover for the injured Richard Wood.

Martin is set for his debut on Tuesday at Bournemouth as Coventry hope to hit back from a third straight home defeat.

Coventry have also received clearance to recall striker Cody McDonald from his loan spell at Gillingham.

The Sky Blues had an option of recalling 26-year-old McDonald after one month of his scheduled 93-day loan.

But they have had to receive permission from the Football League to bring back the striker, who has hit four goals in seven games since rejoining his former club on 25 January,

"Cody is probably one of a lot of players with something to prove here," said caretaker manager Lee Carsley.

"He's been in good goalscoring form at Gillingham, so he's another option."

As for Martin, the Isle of Wight-born defender's scheduled loan stay at the Ricoh Arena is due to run up to Monday, 20 May.

Since being signed by Southampton in July 2009 from non-league Eastleigh, he has made 22 first team appearances, his only goal for the club ironically coming at the Ricoh Arena 13 months ago when he netted the Saints' the winner in their 2-1 FA Cup third round win over the Sky Blues.

Carsley moved for Martin after watching him play for the Saints' reserves in an Under-21 Premier League game against Wolves at the Bucks Head a fortnight ago.

"I saw straight away he was aggressive and quick," Carsley told BBC Coventry & Warwickshire. "And he can use the ball well.

"Southampton have changed their style this season and have been doing a lot of the same sort of sessions we've been doing recently, so he'll be up to speed on what we're trying to do in terms of pressing the ball and getting the ball back quickly."

It is not yet clear how long central defender Wood will be sidelined, but it is hoped that he will be back before the end of the season.

Wood came off injured in last Tuesday night's Johnstone's Paint Trophy northern final second leg win at Crewe with a hamstring injury, before missing's Saturday's League One rematch at the Ricoh, which the Sky Blues lost 2-1.