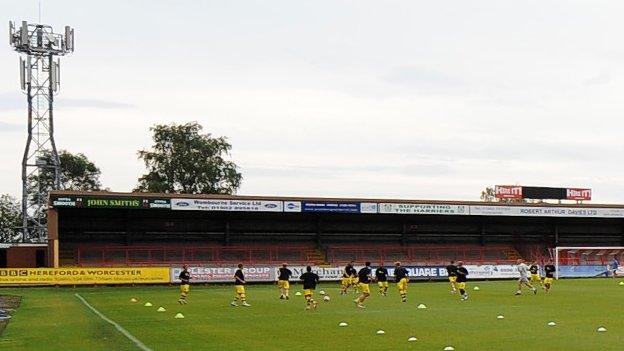 An unnamed Kidderminster Harriers player has complained of being racially abused from the away end during their 3-1 win over Alfreton on Saturday.

The matter has been reported to the police and the Football Association.

A Kidderminster statement said the player made the complaint during the first half of the game at Aggborough.

Harriers are appealing for any witnesses to come forward and say they have had full co-operation from Alfreton's staff and directors.

A total of 87 away supporters attended the match, which Kidderminster won 3-1.

"Kidderminster Harriers has a long and proud tradition as a family club and strongly enforces a zero-tolerance policy on racism and indeed all forms of abuse - behaviour of this type from any fan attending matches at Aggborough as a Harriers supporter or a visiting spectator is wholly unacceptable," the statement added.