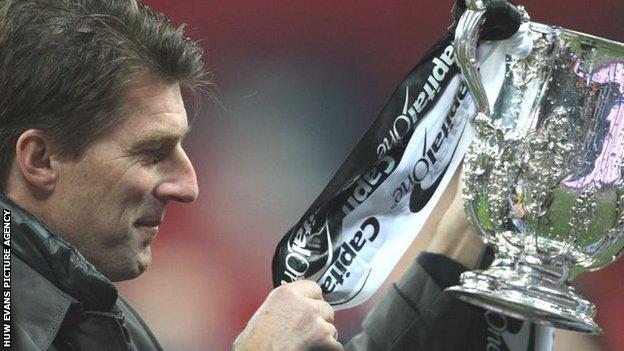 The Swans clinched a place in the Europa League by beating Bradford 5-0 in the Capital One Cup final on Sunday.

Laudrup, who has one more year on his contract and insists he will stay, has been linked with Real Madrid and Chelsea.

And Spaniard Michu revealed: "I have gone up to Michael and said 'stay with us now we are in Europe'."

Laudrup brought Michu to Swansea from Rayo Vallecano before the start of the season, and the 26-year-old forward has paid his manager back in goals.

His first-half strike at Wembley was his 19th of the season, and he paid tribute to Laudrup's influence on his own play and the rest of the team.

"The gaffer here has done great in his first season," said Michu.

"I know other people will want him. He is really good, doing really well and maybe he can go with another club, but I hope he will stay here.

"We are growing up really fast and it is always difficult for a club of our size to win a trophy.

"But I think now we are going to play in Europe we can bring in some very good players and can be a stronger team next season."

Laudrup has a contract until the summer of 2014, and has reiterated his intention to stay in south Wales for a second season.

The 48-year-old recently won 72% of the votes in a poll among Real Madrid supporters on who should succeed Jose Mourinho at the Bernabeu.

"I'm proud of that," said Laudrup, who won a league title with Real Madrid in 1995. "To have 40,000 or 50,000 votes and be in front of two huge names like Rafael Benitez and Carlo Ancelotti, who have won league titles in Spain and Italy and the Champions League, I'm very grateful.

"There will always be rumours but my intention is to stay. I have a contract for one more year.

"Even if you have a 10-year deal there will always be rumours. My intention is to stay here, that's all I can say really."

Michu's goal-scoring prowess has also brought him to the attention of Europe's leading clubs.

Bought from Rayo Vallecano in 2012 for £2.2m, Michu recently signed a contract extension and Laudrup suggested his worth has now risen to £30m.