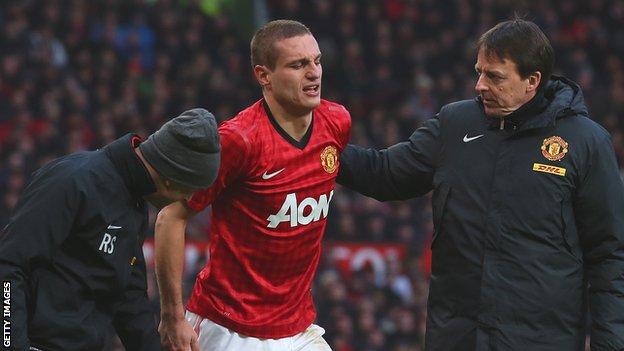 Manchester United captain Nemanja Vidic is confident that he will soon be available for every game as he seeks to overcome a troublesome knee injury.

Vidic admitted he is currently managing the problem that has limited him to only 14 starts since December 2011.

"With playing Wednesday and Saturday, some games I have to think if it's good for myself to play or not," the Serbia defender told BBC Radio Manchester.

"After every game I feel better and better, which is a good sign."

The 31-year-old believes his knee will be in peak condition before the end of the campaign, after revealing he has experienced swelling - but no pain - after some recent outings.

"Sometimes I will get reactions, sometimes not," added Vidic, who has played 256 times for the Premier League leaders.

"When I have got through two or three months without injuries, I will be fine. It's not long-term. It's normal procedure after this kind of operation.

"We have to manage the knee for the next two or three months and after that it's going to be normal."

Vidic's injury issues began when he suffered ligament damage in his right knee during a Champions League tie against Basel.

He missed the remainder of the 2011-12 campaign and required another operation in September after complaining of tightness in the knee.

The centre-back returned to action in mid-December and has appeared in 10 of United's last 16 games in all competitions, including the 2-0 win at lowly QPR on Saturday, which maintained the club's charge towards a record 20th domestic league title.

Keen for his skipper to avoid another lay-off, manager Sir Alex Ferguson has allowed Vidic time to rest between games and even left him out of the side for the first leg of their Champions League tie against Real Madrid earlier this month, instead pairing Rio Ferdinand and Jonny Evans at the heart of defence.