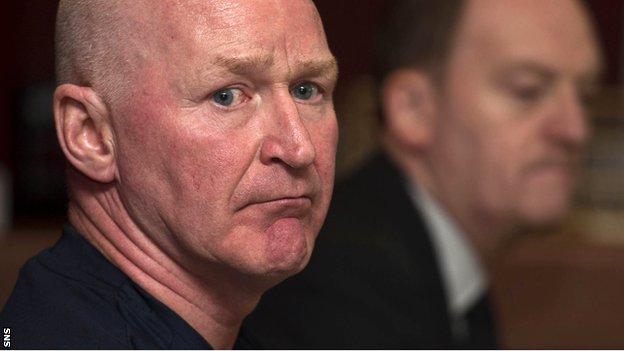 Dundee's interim manager John Brown is shrugging off criticism over his appointment and insists he wants the job permanently.

"That's the position we're in," said Brown. "The fans are unhappy, and that comes with the territory.

"It's why I'm interim manager. I want the opportunity to win games and put my hat in the ring for the job."

Brown's appointment was largely unexpected, as he has not managed a club since an unsuccessful spell at Clyde that ended in 2009.

There's a lot of guys with a lot of coaching badges that are out of work. It's easy for them to have a pop but just wait and see what happens.

Former Dundee chairman Stuart Murphy believes the consensus view among fans is that Brown is the wrong man for the job and the club needs to be more engaged with its supporters.

"The feeling that has come across loud and clear was a huge feeling of disappointment about the appointment," said Murphy.

"Given that some of the sound bites had been suggesting that the mailbag contained applicants of such a calibre and stature that the fans had something to look forward to.

"No disrespect to John Brown as an individual, but when the name was unveiled, there was an element of disappointment in it.

"It's a curious one and it's something that folk are trying to fathom out at the moment. I think there's a degree of irony that a fans-owned and fans-run club can feel so disconnected from its fan base.

"The communications have been poor recently, and there's a vacuum of information, which folks tend to try and fill themselves - which is when you get the rumour mill coming in.

"There's a feeling the CEO was a part in the appointment, which may or may not be true. It'll be interesting to see if the CEO and the board work together to get Mr Brown engaged."

However, Brown hit back at the criticism his appointment elicited in some sections of the media and by some whom he believes would have been in for the job.

"There's a lot of guys out there who have probably been critical about the appointment, who've probably put their CV in last week and are saying it's the wrong appointment, maybe because they didn't get the opportunity.

"There's a bitterness there. I don't know the reaction from fans because I don't listen to the radio or the papers.

"I've been too long in the game but I've had pals phoning me and saying 'aye, you thought he was your pal....'

"I didn't want to say to them but he (one of his critics) was one of the first who put himself in for the job after singing the previous manager's praises.

"That's football. There's a lot of guys with a lot of coaching badges that are out of work.

"It's easy for them to have a pop but just wait and see what happens.

"I've come to Dundee and there's a big gap with the 15 points, but if we can start winning games, we've lacked scoring goals and conceded.

"This is Dundee football club. We've got a big week and we're only focusing on the game on Wednesday night to get three points and ask a question or two of the teams above us.

"That's what I've been asked to come in and do."