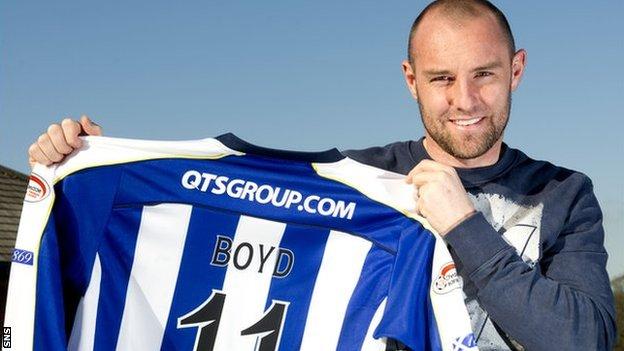 Kris Boyd is looking for a period of stability now that he is home from a spell in the United States and has his immediate football career settled.

The Scottish Premier League's all-time top scorer has joined Kilmarnock until May and hopes his return does not herald the exit of boss Kenny Shiels.

"Everywhere I go the manager seems to leave or get sacked," said Boyd.

"Kenny has been great. I trained here before I went to America and I really enjoyed it. I knew they trained hard."

Having come through the youth ranks at Killie, 29-year-old Boyd went on to star for the first team before joining Rangers in 2006, then Middlesbrough, a loan spell at Nottingham Forest and Turkish club Eskisehirspor before crossing the Atlantic to join Portland Timbers.

He detailed the list of managers he has played under who have left or had the chop.

"When I went to Rangers Alex McLeish left after six months, then Paul Le Guen left after a year," he explained.

"I then had a long successful period with Walter [Smith].

"When I went to Middlesbrough with Gordon [Strachan], it didn't work out, but the worst of all was when I went to Turkey.

"It was a difficult period for me. I also had a successful period at Notts Forest under Billy [Davies].

"When I went to America it was good at the beginning but Spenny [John Spencer] got sacked there as well."

While Boyd joked about at the prospect of his arrival pushing the Northern Irishman out the door at Rugby Park, the Scotland international is himself unclear what will happen when his short-term deal runs out at the end of the season.

"I'll give it my all between now and the summer and then we'll see what happens," he said.

"This gives me the chance to get my match sharpness back.

"I've been back training but this is a great opportunity. I want to get back into the team and get playing football again.

"It wasn't about the financial side of things; it's close to my family and I need to play football.

"I need to prove myself again. I'm hungry and ready to play."

Boyd's last run in a team was at Portland last year but he was a free agent on his release from the MLS side.

"There's a good mentality about the club. They want to win stuff," he said of the Ayrshire outfit he has returned to.

"Even when I left I thought one day I'd be back playing in a Kilmarnock jersey. Maybe it has come sooner than I expected."