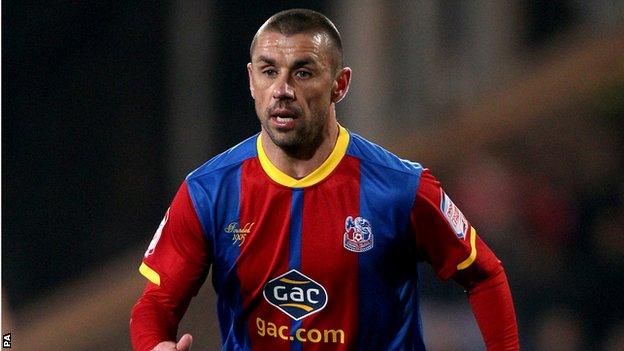 The 39-year-old converted a penalty in first-half stoppage time after Glenn Murray's earlier spot-kick was saved.

Phillips then scored twice in as many minutes early in the second half to further punish their promotion rivals.

Jay Simpson pulled one back, but Wilfried Zaha added a Palace fourth before David Meyler's consolation.

He had wanted to take the home side's first penalty, awarded in the 30th minute when midfielder Jonathan Williams collected Dean Moxey's ball into the area and was bundled over by Meyler.

Regular penalty-taker Murray, the country's top scorer with 28 goals this season, stepped up instead but keeper David Stockdale dived to his right to pull off a fine save.

Stockdale had looked nervy in the opening stages and almost gifted Palace an early lead when dropping Jacob Butterfield's cross at the feet of Peter Ramage, but his shot was hacked off the line by Ahmed Elmohamady.

The keeper redeemed himself with the penalty save, but could not repeat his heroics when a linesman judged that Jack Hobbs had handled Murray's shot, and referee Mark Heywood pointed to the spot again.

Phillips smashed the penalty down the middle, and Stockdale could not stop the ball rolling over the line despite getting a hand to it.

The striker scored again early in the second half when he collected Zaha's pass and beat Stockdale, despite hitting his shot into the ground.

A minute later, Phillips completed his hat-trick with a deflected effort from another clever pass by Zaha.

Simpson scored for Hull when he headed in Elmohamady's cross, but Zaha ensured there would be no fightback three minutes later with a neat lob over Stockdale.

Meyler nodded in Hull's second right at the end from Robbie Brady's cross, but it was not enough.

Crystal Palace manager Ian Holloway on striker Kevin Phillips: "The bloke is so professional and is still as fit as a flea. He's got the lungs of a 26-year-old.

"I'm just delighted he understands how I want to use him here.

"I knew that with the wide players we have here he would be the ideal man to get on the end of things."

Hull manager Steve Bruce: "I've no complaints with the result but that may be the worst penalty I have ever seen.

"It was a shocking, shocking decision. Referees make the decisions but we have to live with them.

"Kevin Phillips has always haunted me over the years and even at this age he is still doing it.

"Then his second was a mis-hit and the third got a deflection so we knew it wasn't going to be our night."