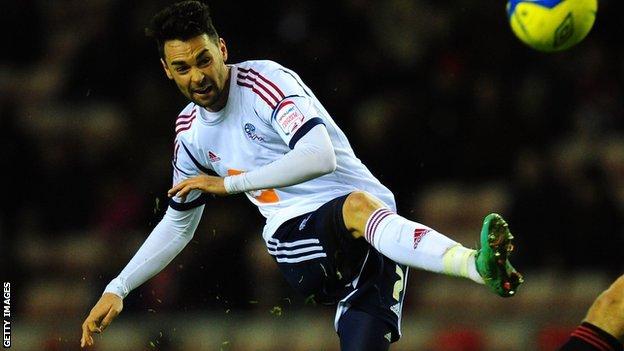 A stoppage-time Chris Eagles winner was enough for Bolton to beat FA Cup quarter-finalists Blackburn and extend their unbeaten run to seven games.

Eagles, a former Burnley player, fired past Jake Kean from the edge of the box with the final kick of the game.

Bolton had almost nicked it when Adam Henley cleared Lee Chung-yong's shot off the line before Eagles' winner.

The win keeps Wanderers, who have registered four successive league wins for the first time since December 2006, well in touch with the top six.

Despite carving out more chances throughout the 90 minutes, the hosts needed goalkeeper Lonergan - making his first league start for the club in the absence of Adam Bogdan - to be in top form to keep out efforts from Hanley and Rhodes in the second half.

Dougie Freedman's side had scored early in each of their previous three victories and Darren Pratley almost repeated the feat with less than a minute played, but his 20-yard strike flew narrowly over.

The midfielder also tested Kean with an angled effort from the right touchline, while Jason Lowe produced an excellent last-ditch tackle to deny David Ngog.

The price of Cup success

Since beating Arsenal in the FA Cup fifth round on 16 February, Blackburn have taken just one point from their five Championship games.

The visitors, who face Millwall in the last eight of the FA Cup on Sunday, had plenty of possession and several set-pieces in attacking areas, although Hanley's flicked effort onto the bar from Morten Gamst Pedersen's cross was their only attempt of note in the first period.

Scotland centre-back Hanley hit the woodwork for a second time with a looping header shortly after the break, with the help of a slight deflection from Lonergan.

After Lonergan had saved Rhodes's powerful close-range shot, Bolton came close to a winner themselves when Medo Kamara's effort was tipped away by Kean and teenage full-back Henley kept out Lee's follow-up.

Just when it seemed the game was heading for stalemate, replacement Eagles broke Blackburn's resistance with a 93rd-minute winner.

It means Rovers are 11 points off the play-offs, and seven clear of relegation.

Bolton manager Dougie Freedman: "Chris Eagles is a talented lad and he's got the magic dust that we all look for. He's lost a bit of energy through me flogging him for the last 20-odd games in a row and I pulled him out of the team to benefit the whole group of players, not because I feel he's lost form.

"I did my homework and I knew Blackburn would come here for a draw and make it difficult. But I felt in the last 15 or 20 minutes that we were starting to come out on top."

Blackburn manager Michael Appleton: "It was end-to-end and a fully committed derby. Bolton are on a good little run at the minute and sometimes you go on a purple patch like that and things go for you. But I believe that the harder you work, the luckier you'll become.

"It was a performance that sums me up as a person and as a manager. I want 11 players to enter the field and put the type of performance in like they did tonight."