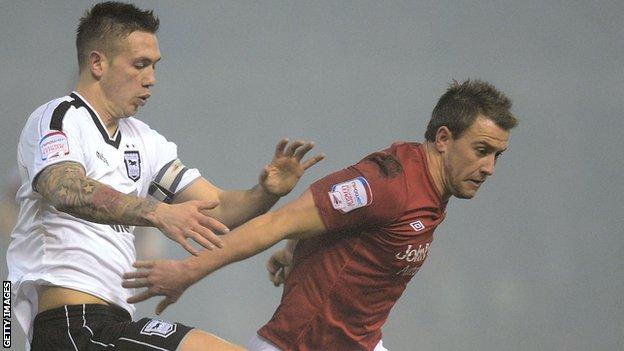 Nottingham Forest moved to within a place of the play-offs after a narrow win over nine-man Ipswich Town.

Ipswich were reduced to 10 men before half-time when Lee Martin reacted angrily to a tackle from Henri Lanbsury.

Richard Stearman was dismissed for second bookable offence with 21 minutes of the match to go.

Referee David Webb had been busy from the outset on a foggy night at the City Ground, with Stearman and Forest's Elliott Ward going into the book early on for crude challenges.

Ipswich were convinced they had earned a penalty when Martin went down under a challenge from two Forest defenders, but referee Webb decided the offence had taken place just outside the area.

Martin then clashed with Lansbury five minutes from half-time, aiming his arm into the Forest player's midriff as the pair tangled. The former Arsenal midfielder went to ground, and Webb showed Martin a red card.

Forest could not make their numerical advantage count, which increased on 69 minutes when Stearman barged Andy Reid off the ball near the touchline.

It was Reid who soon went close to breaking the deadlock, forcing Ipswich goalkeeper Stephen Henderson into a fine save to push away a long-range effort.

And the hosts benefitted from a slice of luck with six minutes remaining when McGugan's shot from distance struck an Ipswich defender to wrong-foot Henderson and roll into the net.

Ipswich manager Mick McCarthy: "They're brilliant, they're a great bunch, they really are fabulous. I was really proud of the way they went about their job.

"We were unlucky not to hold out. It's a deflection that's cost us - they didn't look like they were going to get it any other way."

On the two dismissals: "The first one I've no arguments with and, maybe, Stears just doing it having been booked already was a bit reckless on his part."

Forest manager Billy Davies: "We got a break. It was a frustrating night.

"We're not always going to get that fluid, passing football - and we've had that in our last three matches. What we got tonight was a grinding team who looked completely leggy and they dug in and got the result.