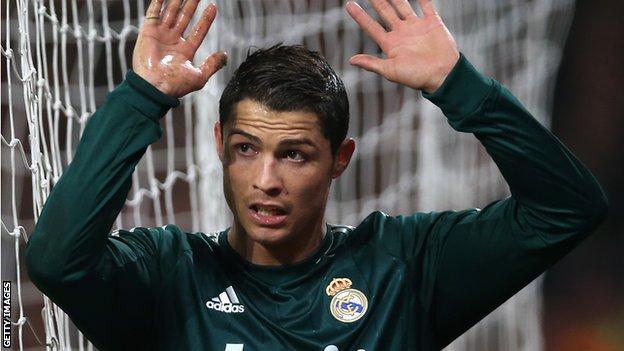 United looked on course for a place in the quarter-finals at Real Madrid's expense after Sergio Ramos's own goal just after half-time gave them a platform to build on the 1-1 draw from the first leg at the Bernabeu.

The tie was transformed by Turkish referee Cuneyt Cakir's decision to send off Nani for an aerial challenge on Real Madrid defender Alvaro Arbeloa after 56 minutes - a red card that reduced Ferguson and his players to fury.

Jose Mourinho's side, a subdued force until then, took advantage ruthlessly with two goals in three minutes from ex-Tottenham midfield man Luka Modric and former United golden boy Cristiano Ronaldo to move into the last eight.

United responded superbly with a typical late rally that brought a series of fine saves from Real keeper Diego Lopez, but events midway through a dramatic second half settled the destiny of an enthralling game.

Ferguson's body language after Nani's dismissal screamed anger and injustice and he had good reason to feel United could well have been taking their place in the latter stages until the referee's intervention.

Mourinho now moves on towards his target of a third Champions League with three different clubs while United must concentrate on domestic matters as they close in on a 20th title with a commanding 12-point lead in the Premier League and a place in the quarter-finals of the FA Cup.

Ferguson's decision to drop Wayne Rooney was another of the bold selection decisions the Scot is adept at taking - he also gave Ryan Giggs his 1,000th professional appearance - and he was rewarded with a first half display that mixed strict defensive discipline with attacking threat on the break.

Ronaldo received a rapturous reception that echoed around Old Trafford, responding with a wave and a tap of the hand on his heart in return.

Real's superstar was kept at arm's length in the first half, wasting a free-kick then being frustrated by a fine challenge from United captain Nemanja Vidic when he finally found space in the area.

And Vidic came closest to breaking the deadlock in an engrossing contest when his header hit the post from a Giggs corner, with Danny Welbeck being ruled offside as he attempted to turn in the rebound.

Welbeck's energy and movement was a feature of United's play but he was unable to turn in an inviting rebound when Lopez failed to hold Robin van Persie's initial effort.

Cristiano Ronaldo has scored eight goals in eight Champions League games this season, and 18 in his last 18

Real suffered a blow towards the end of the first half when the dangerous Angel di Maria pulled up holding his hamstring and was replaced by Brazilian Kaka.

United did make the breakthrough three minutes after half-time when Nani won the ball back from Raphael Varane as he failed to clear in the area and his cross took the faintest touch off Welbeck before Ramos deflected the ball past Lopez.

It was reward for United's efforts - but events were to suddenly conspire against them and take this tie beyond their control after 56 minutes.

Nani went into a high challenge with Arbeloa but his eyes were on the ball throughout and United were stunned when referee Cakir waited for the Portuguese to get back on his feet before producing the red card.

Ferguson raced into his technical area to protest while United's players surrounded the official to no avail - United's manager then turning to all parts of Old Trafford and raising his arms and clenching his fists to plead for even louder support.

It came but the sense that the game had taken a crucial turn against United was underscored as Real struck to make the most of their numerical advantage with two quick goals.

Mourinho's reaction to the red card was to replace Arbeloa with Modric, who took the opportunity to put his struggles at the Bernabeu behind him at the worst possible time for United with a fine equaliser after 66 minutes.

He showed a fine change of pace on the edge of the area before swerving a 20-yard shot past United keeper David de Gea and into the net via the post.

And, inevitably, Ronaldo made his impact with Real's second three minutes later, turning in Gonzalo Higuain's cross from a tight angle at the far post. His celebrations were muted but the travelling Real supporters packed into a corner of Old Trafford were ecstatic.

Rooney was introduced for Tom Cleverley as United showed the spirit and fight that is their trademark as they tackled an impossible task.

Lopez saved crucially from Michael Carrick and Van Persie while Rooney shot over and into the Stretford End from 10 yards.

The keeper also saved acrobatically from another Vidic header although Real remained dangerous on the break with Kaka hitting the post and Ronaldo bringing saves from De Gea.

A night of frustration was summed up by jeers aimed at the referee at the final whistle, jeers that soon turned to applause for United's disappointed players.