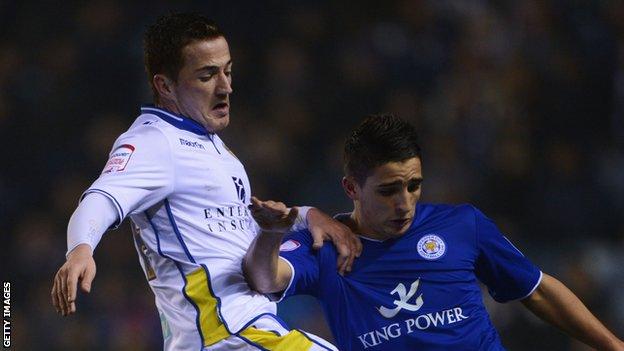 Defender Michael Keane headed an injury-time equaliser to rescue a point for Leicester and deal a blow to Leeds' Championship play-off hopes a blow.

Keane, 20, on loan from Manchester United, nodded in a Martyn Waghorn corner to deny the visitors a first win on the road since 1 December.

Leeds v Leicester at a glance

Leeds had gone ahead when Sam Byram scrambled in from a previous set-piece.

Chances for Chris Wood and Harry Kane then went begging for the hosts before Keane rose to deny Leeds at the end.

The result kept Neil Warnock's side down in 10th spot, eight points behind their fifth-placed opponents.

Leicester had started the brighter, with Anthony Knockaert and Wood shooting over from inside the penalty area within the first 10 minutes.

However, Leeds looked dangerous on the counter-attack throughout and Foxes goalkeeper Kasper Schmeichel stretched to palm away Byram's header before a later cut-back from the rampaging full-back came to nothing.

The 19-year-old was Leeds' most potent threat and he finally put his side in front from six yards after the interval when the ball fell to him following Ross McCormack's corner.

Leeds seemed comfortable in the final quarter before they conceded from another dead ball, with the goal denying them a third win in four league matches.

"It was really good to get something out of the game even though it was such a late goal. I thought we deserved it.

"We showed some good form in the first half but conceding the goal we did knocked us out of our stride a little bit. But the players showed a lot of desire and determination to get back into it.

"Leeds were a very hard working side and and got themselves in front. Keane has done great for us so far and is clearly going to be a very good player, I think his goal was just reward for us."

"When you are disappointed to come away with a point from Leicester it shows how far we have come. It augurs well for the the final 11 games and we have six of them at home.

"There are a few broken hearts and tired legs tonight and it does feel like a loss under the circumstances.

"Obviously it is bound to be disappointing when you concede a goal so late in the game. But despite that it was a great team performance and I was really pleased with all the lads."