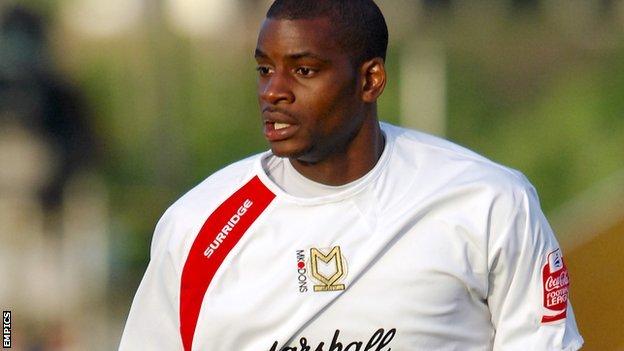 The Dons made a bright start and Dean Bowditch hit the post with a free-kick when Doncaster goalkeeper Gary Woods pushed his effort onto the upright.

Doncaster created little while Daniel Powell's first-time shot from 20 yards made it 2-0, before Stephen Gleeson added a late third with a low effort.

MK Dons, who had only taken five points from their last eight league games, have now moved up to 11th, 10 points off a play-off place.

McLeod claimed his first goal since rejoining the club following his release from Portsmouth at the beginning of January.

Winger Powell, 21, scored on the day he signed a two-year contract extension with MK Dons, a deal that keeps him with the club until the summer of 2015, before substitute Gleeson netted with his first touch after McLeod's header.

Rovers, who lost for the first time in six matches, remain top with a one-point advantage but have now played one game more than second-placed Sheffield United.

"It's a frustrating night, because that's us at our best and we've not seen it often enough, and the reason for that is suspensions and injuries.

"There's an awful lot of players still out too, but that was a wonderful performance.

"The place was rocking, and I'd like to say a big thank you to the fans. That was for them, because we've had an awful lot of criticism and stick, but it was important we stuck to our guns and to the team we believe in.

"It just shows the quality we've got when we have players like Stephen Gleeson and Luke Chadwick back fit."

"Simply we lost to the better team on the night, they were better than us.

"The way they controlled the ball, their movement was always a problem for us and we just didn't deal with it all night.

"It was a really harsh lesson for us.

"We didn't retain possession from the first minute to the last, so that was a dangerous sign."