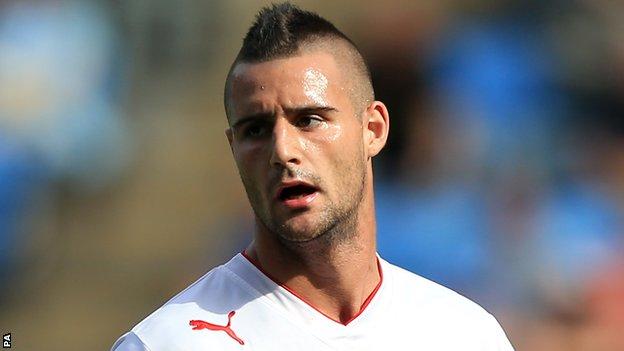 The hosts dictated the first half with Gavin Mahon - playing against his former club - and Haber both hitting the woodwork from headers.

After the break, Clayton Donaldson had the Bees' first chance when he was sent through, but saw his strike saved.

Boro finally went ahead when Haber got on the end of a Mark Roberts header forward and finished neatly.

Haber's goal forced the promotion-chasing visitors into action, with Steve Arnold making a great save to deny Bradley Wright-Phillips.

However, they were unable to find an equaliser and Stevenage came close to scoring again, with Sam Hoskins turning on the edge of the box before unleashing a powerful strike that was saved by Simon Moore.

The result means Brentford, who could have moved level on points with second-placed Sheffield United with a win, fall to fifth, behind Yeovil on goal difference.

Stevenage secured only their third win in 2013 and stay 15th, 10 points above the relegation zone.

"That was a much better night for all concerned, certainly if you're a Stevenage fan. From start to finish we looked a side competing for something special.

"No criticism of the group whatsoever in the first half other than we didn't really punish them for the opportunities created.

"The challenge for us was to make sure the second period was just as competitive and to find somehow, some way, the difference in the game.

"The team performance was a very, very good one, as good as anything we've seen here this year."