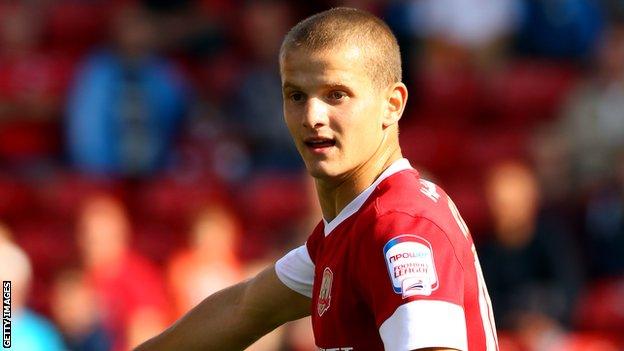 Tomasz Cywka's third goal in as many games earned Barnsley a point towards their Championship survival bid.

But David Flitcroft's side still dropped back into the bottom three after Wolves won 2-0 at Millwall.

Charlie Austin had given Burnley a ninth-minute lead, converting Danny Lafferty's cross to score his 26th goal of the season.

Austin had a penalty appeal rejected with 15 minutes left, before Cywka hit a sweet shot into the top corner.

Burnley went into the game having ended a six-match winless run with Saturday's 1-0 victory at Charlton, secured by a spectacular Austin winner.

And the striker found the net again when he met Lafferty's first-time cross with a deft clipped finish from close range.

Barnsley continued to press for an equaliser with Chris O'Grady flashing a 25th-minute effort just wide of the left-hand post from the edge of the area.

Their best chance of the first-half fell to Kelvin Etuhu, whose powerful header was well saved from Lee Grant.

Flitcroft made a half-time switch, with Cywka replacing Harewood, and Barnsley almost drew level soon after the break as O'Grady flicked on to Chris Dagnall who fired wide with a clear sight of goal.

The home side had a penalty shout with a quarter-of-an-hour to go as Martin Cranie appeared to bring down Austin, but referee Carl Boyeson waved away the striker's protests.

Cranie and his team-mates were given another let off seconds later as Austin missed the target with a left-foot strike when well placed.

And with six minutes remaining, Cywka found the top corner with a sweet strike beyond Grant.

Burnley manager Sean Dyche: "The performance was patchy. There were parts I was pleased with and we started very brightly but the interesting thing is, we have gone 1-0 up and there is an edge and that can affect the players.

"Most of Barnsley's play came because they were given a lease of life. Not one lease but three.

"The game should have been done. Decisions change the outlook of the game and I can't do anything about it."

Barnsley manager David Flitcroft: "Tomasz Cywka's work ethic has been incredible. The guy has been out of the team and he's been someone who has kept patience, been resilient and has epitomised everything I believe a human being should be.

"I was disappointed in myself because of maybe the way we set the team up in the first half. Chris O'Grady led the fight in the second half but he should have been down the middle. Hindsight is a wonderful thing but it is definitely something I'll learn from."