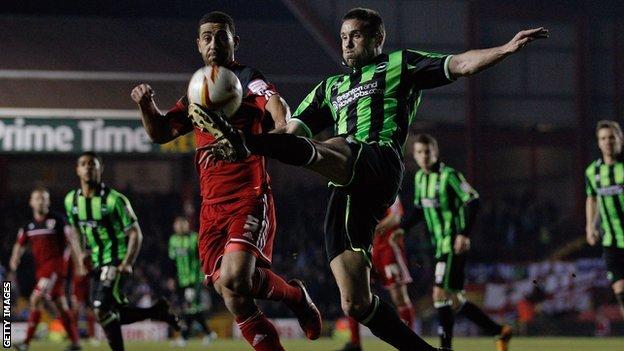 Despite netting four against Huddersfield on Saturday, Brighton looked out of sorts and failed to trouble City keeper Tom Heaton.

Brendan Moloney also had a shot deflected just wide in the second half.

The result means Brighton, now unbeaten in six games, remain in the final play-off place and the Robins stay bottom of the Championship, three points from safety.

But despite their lowly position, City are now unbeaten in five home games and look invigorated and organised under head coach Sean O'Driscoll, who arrived in January.

After a cagey opening 15 minutes the hosts took hold of the game, Cole Skuse seeing two attempts blocked by the Seagulls defence following a Paul Anderson corner, before Anderson himself shot straight at Kuszczak from the edge of the box.

Kelly then saw his fierce volley fly into the hands of the Polish keeper, who was bundled into the net by City striker Jon Stead.

At the other end, Andrea Orlandi tried his luck with a forceful drive but it was easily saved by keeper Heaton.

Brighton were forced to introduce Saturday's hat-trick hero Leonardo Ulloa just before half-time after top-scorer Craig Mackail-Smith limped off with a knee injury.

But the Argentine was unable to make the same impact he showed against Huddersfield, and his team also failed to improve in the second half.

While City pushed to break the deadlock - Moloney's volley wide their best chance - Brighton were wasteful with the few opportunities they created.

Will Buckley looked lively but had lacked options going forward, while David Lopez's sloppy free-kick was skewed across goal without contact from his team-mates.

City continued to press for the win, but missed the opportunity to grab a much-needed three points.

Bristol City manger Sean O'Driscoll: "The players gave everything and no one would have known which team were bottom and which battling for promotion.

"We have now kept successive clean sheets in goalless games with good sides. That is a big change from earlier in the season and the players have taken on board what I have asked of them.

"We now need that bit of extra quality, but if we keep on showing that level of commitment we will have a chance of surviving in the Championship."

Brighton manager Gus Poyet: "It looks bad. Craig could be out for two or three months so his season may be over.

"I don't like the emergency loan system, but I am not so stupid that I won't use it as we are now very short of strikers.

"I'll start looking for a new striker tomorrow. It was meant to be my day off, but now I expect to spend most of it on the phone.

"The result is everything. We couldn't pass the ball on the night and didn't play well, but we did the basics right to get a precious point."