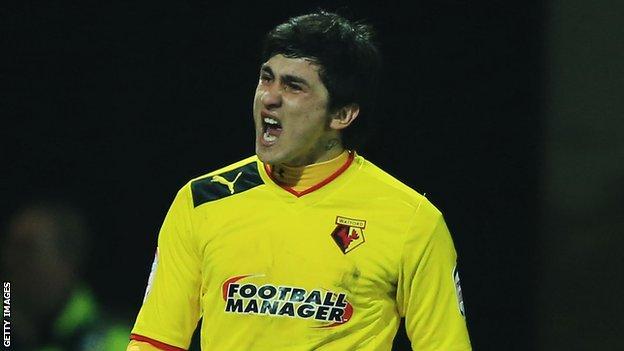 Substitute Fernando Forestieri scored twice as Watford moved up to second in the Championship with victory over Sheffield Wednesday.

Michail Antonio capitalised on an error by Watford goalkeeper Jonathan Bond to give the visitors the lead.

But Forestieri, brought on at the start of the second half, smashed the ball into the roof of the net to equalise.

And the striker sealed victory just after the hour, firing into the bottom corner from Troy Deeney's cross.

The result leaves the Owls 20th, only two points clear of the bottom three.

Watford, unbeaten at Vicarage Road since New Year's Day, hit the ground running and had a couple of early chances to open the scoring.

Deeney shot into the side netting before 20-goal forward Matej Vydra hit the post from four yards.

However it was the visitors who took the lead against the run of play when Watford keeper Bond failed to control Marco Cassetti's backpass and Antonio stole in to roll the ball home.

The game opened up considerably after that goal, with both sides having chances to score.

Bond did well to deny Jeremy Helan's drive, while Watford's Joel Ekstrand launched a shot over the bar.

Watford boss Gianfranco Zola brought on Forestieri and Nathaniel Chalobah for the second half and the changes had an almost immediate effect.

A 53rd-minute corner was flicked on and Forestieri was on hand to smash the ball high into the net.

Watford immediately went on the hunt for a second and that duly arrived 10 minutes later as Forestieri drove a shot into the bottom corner.

Bond then kept out a Leroy Lita header late on to ensure Watford took victory.

Watford manager Gianfranco Zola: "The quality [of the substitutes] that we put in to the second half has made a difference and it covered some of the difficulties that we had during the game, especially in the first half.

"They created a lot of problems and fortunately the two players that came on in the second half gave the excellent quality that we needed to edge to the win.

"They've really made a big difference. That's what you need when sometimes things don't work well - you need to be able to change things when it's needed and Fernando and Nathaniel did exactly that today."

Sheffield Wednesday manager Dave Jones: "Even in the second half we've still had chances. But we had a 10-minute spell where they got the two goals.

"We shouldn't have got done from the corner and the lad's [Forestieri] got a little break with the shot that's gone through about five people's legs, which is hard to bear."