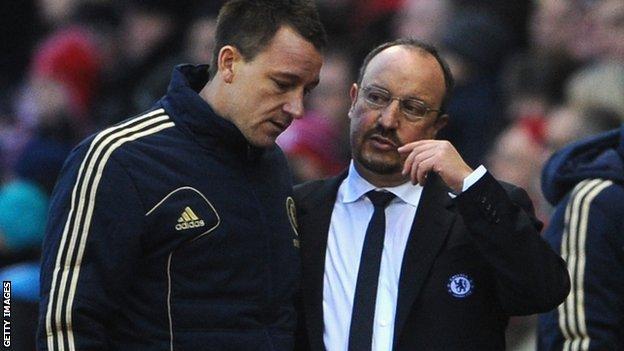 Chelsea interim manager Rafael Benitez insists he has a "fantastic" relationship with the club's players and retains their full support.

Reports suggested Benitez, 52, was involved in a heated exchange with members of his squad after their 2-0 defeat at Manchester City on Sunday.

All competitions since taking over in November 2012; correct to 26 February

Chelsea have won only 13 of the 26 matches since Benitez took over in November and are fourth in the Premier League, 19 points behind leaders Manchester United.

However, the Spaniard claims the players are certain of securing a top-three position.

"This team finished sixth last year and this is a good team with good players," added Benitez.

"We have played with quality and the lads are training hard, so it is not a problem.

"I like to talk with them every day, and they are all convinced we would finish in the top three."

Chelsea, who lost in the semi-finals of the Capital One Cup against Swansea, visit Middlesbrough in the FA Cup fifth round on Wednesday and Benitez dismissed reports of a training ground argument.

He said: "This was a normal meeting between players and technical staff, which happens after every game.

"It was normal talk. You show your disappointment, that is normal."

I like to talk with them every day, and they are all convinced we would finish in the top three

Chelsea captain John Terry, who earlier this season denied there was a rift between him and Benitez, was reported to have led the response of the players.

"I can understand the frustrations of Terry, he is an important player for us and has been injured with his knee," said Benitez, who was appointed in November following the sacking of Roberto Di Matteo.

"It was a very brief exchange of ideas, and that is it, nothing else. It is just a team talk after a defeat.

"We had a meeting on the pitch with my players and technical staff, which is part of our business.

"Now we have to move on and start thinking about Middlesbrough."

Asked about his relationship with the Chelsea players, Benitez said: "It is fantastic. I have no problem."