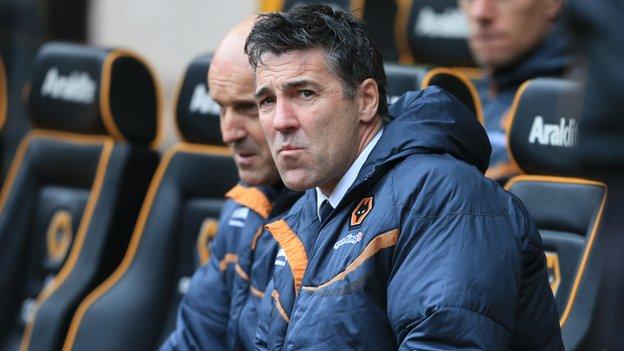 Wolves manager Dean Saunders insists his struggling side are capable of pulling out of their current nosedive by beating Championship high-fliers Watford at Molineux on Friday night.

Saunders insists that Wolves were a match for leaders Cardiff on Sunday - and that they can see off second-placed Watford if they cut out the mistakes.

"I've watched Watford," he said. "There is no reason why we can't beat them.

"But you'll not win games if you keep making mistakes," he told BBC WM.

"It keeps happening to us. It's just horrendous. Cardiff are top of the league and, in patches, we did really well.

"They had lots of possession but, on the basis of the whole 90 minutes, we should have won. There were lots of positives to take."

Poor defending, which let in Fraizer Campbell for his two match-winning headers, allied to a glaring late miss from top scorer Sylvan Ebanks-Blake, added up to a 2-1 defeat against Cardiff - Wolves' 12th game without a win.

But Saunders remains adamant that, with a bit of fine tuning, it could all so easily turn.

"But for two bad mistakes, then Sylvan's miss, which is an open goal, we'd be talking about a win instead of a defeat," said the much-travelled former Wales international striker.

"I told Sylvan I've missed a few of those.

"You can put another 10 of those crosses in - he'll score nine of them. The main thing was that he made the run and got himself in the right place."

"I put two young full-backs in there," explained Saunders. "When you've gone as many games as we have without a win, nobody's got an argument. It was time to put some fresh minds in.

"They had possession but could not get through. They did not have one chance.

"But, at the end of the day, tactics aren't the be all and end all. It's what's inside your shirt and in your head. Determination plays a massive part.

"The players are fighting. They showed at the end that they're all digging in and having a go.

"We've got to win five or six games and they're capable of doing that."