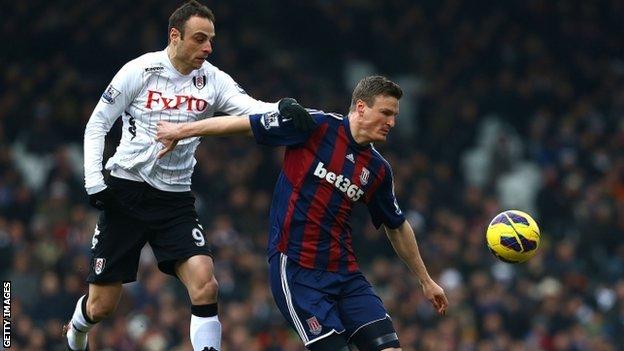 Stoke City boss Tony Pulis says Robert Huth has "let himself down" after the defender was banned for three matches for violent conduct.

Huth, 28, was charged by the Football Association following an incident during the Potters' 1-0 defeat by Fulham at Craven Cottage on Saturday.

Television cameras picked up the German appearing to aim an elbow at Fulham defender Philippe Senderos.

"I don't think Robert will be pleased and it affects the team," said Pulis.

"But everyone makes mistakes, and he will be big enough and strong enough to hold his hand up and say that what he did was wrong."

The clash with Senderos was not seen by the match officials, but the FA took action after reviewing video evidence.

Huth, who joined the Potters in a £5m move from Middlesbrough in 2009, will now miss games against West Ham, Newcastle and West Brom.

"Robert has been fantastic for this football club - a great player and one of the signings we will look back on and say 'what a wonderful signing'," added Pulis.

"But I think he has let himself down more than anything else."

In October, the German defender was not punished for an alleged stamp on Luis Suarez.

Under FA rules, retrospective action cannot be taken if an incident has been seen by the officials, even if the full extent of it has not been witnessed.

And, unlike Huth's clash with Senderos at Fulham, at least one of the match officials saw the coming together of the Stoke defender and Liverpool striker Suarez.