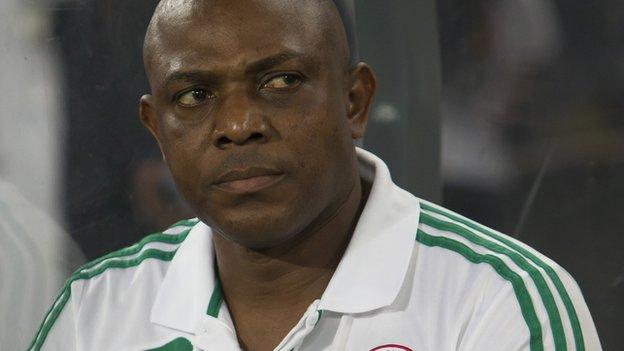 Nigeria coach Stephen Keshi says a row with the country's football authority is 'temporarily' over after he held talks with the Nigeria Football Federation (NFF).

Keshi offered to quit only hours after leading the Super Eagles to their first Africa Cup of Nations crown since 1994.

But he only rescinded his decision after an emergency meeting with Nigeria's Sports Minister Bolaji Abdullahi in Johannesburg.

Keshi revealed on Supersport Monday Night Football programme that a resolution of the dispute that briefly disrupted Nigeria's Africa Cup of Nations celebration is only a 'fragile truce'.

"For now, I have a wonderful relationship with my president [Aminu Maigari], apart from one or two individuals (at the NFF)," Keshi said on the live television programme.

"If I'm tired of staying here, if I don't enjoy what I'm doing, I walk.

For now there is no sack letter, let's move on. Our job is hire today, fire tomorrow

"But you have to give me the respect and the freedom to do my job."

Keshi, only the second man to lift the Africa Cup of Nations title as a player and coach, is also the first black coach to win the trophy since 1992.

The 51-year-old also revealed that his dismissal notice was ready by October 2012 and it was not from the Nigerian FA (NFF).

"It wasn't from my president, not from the board of the federation, but from one or two other people.

"We were not told directly but the speculations were all over the place for some time.

"I kept hearing the same thing at the Nations Cup.

"But we said we are not bothered by this. Let them give us the sack letter and we leave.

"For now there is no sack letter, let's move on. Our job is hire today, fire tomorrow."

Keshi's Nigeria host Kenya in a World Cup qualifier next month before travelling to both Nairobi and Namibia for further ties in June.

It is unclear whether the team leading Group F of the African standings will reschedule the Namibia tie, which is set to be played three days before the Super Eagles start their Confederations Cup campaign.

The African champions face Tahiti in the Brazilian city Belo Horizonte on 17 June, before meeting Uruguay and Spain in Group B of the global competition.