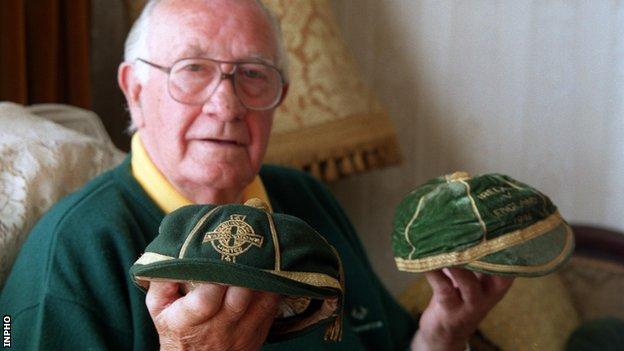 Tributes have been paid to former Northern Ireland and Republic of Ireland international Con Martin who has died at the age of 89.

The Dublin native played six times for Northern Ireland and also made 30 appearances for the Republic.

Martin scored one of the Republic's goals in the 1949 2-0 victory over England at Goodison Park.

He played for Irish clubs Drumcondra and Glentoran before stints in England with Leeds United and Aston Villa.

Martin played for both Northern Ireland and the Republic during a period when players could represent both teams.

During his career, he was regarded as one of the best centre-halves in English football.

Although best known as a centre-half, he made his international debut for the Republic of Ireland as a goalkeeper and played almost a complete season in goal for Aston Villa.

Martin spent eight years at Villa before returning to Ireland in 1956 to become player-manager of Waterford.

"He will be sadly missed and will always be remembered for his contribution to the famous victory over England in 1949," added the FAI president.

"His family continued that tradition with his sons playing the game to a very high level."

Martin's son Mick went to win 51 caps for the Republic of Ireland while his grandson Owen Garvan plays for Crystal Palace and has been capped at Under-21 level for the Irish.

Garvan paid tribute to his grandfather in a Twitter posting.

"Lost a family man and a gentle giant who gave us so many happy memories. So sad but know he is in a better place," said the Crystal Palace player.