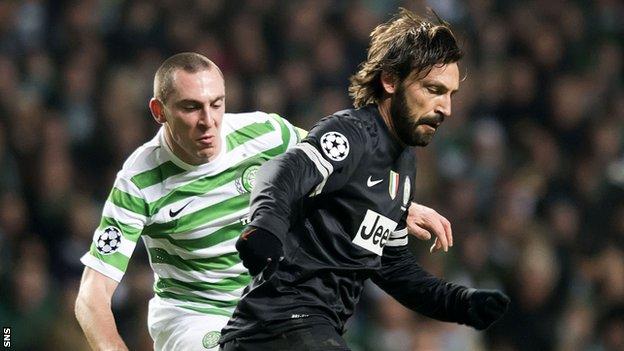 Scott Brown is due to miss Celtic's Champions League last-16 clash with Juventus next week.

And the Celtic skipper is a grave doubt for Scotland's World Cup qualifying double-header against Wales and Serbia, according to manager Neil Lennon.

Lennon is awaiting results from a specialist who has had a look at Brown's long-standing abductor problem.

Defender Mikael Lustig, who has a thigh complaint, has been ruled out of the trip to Turin.

Celtic trail 3-0 from the first leg in Glasgow, while Scotland's World Cup hopes are also slim, having amassed a mere two points from the opening four matches.

With Manchester United's Darren Fletcher missing for the remainder of the season as he battles a chronic bowel complaint, national manager Gordon Strachan will be without what many consider his strongest central midfield pairing for his first competitive matches next month.

Asked if Brown would miss the trip to Italy, Lennon replied: "Oh yes, I would imagine so. He is out indefinitely.

"We are still waiting to hear from the specialist, whether he requires surgery or not and I am hoping that we will get a definitive answer by the end of the week.

"Lustig is still out and Charlie Mulgrew (glute), they are the only three absentees [for Wednesday's trip to Motherwell].

"Lustig is out for two to three weeks, it is bone bruising so it could even be longer.

"So I imagine he will miss Juventus. We are hoping Charlie will be fit for Juventus and the game at the weekend."