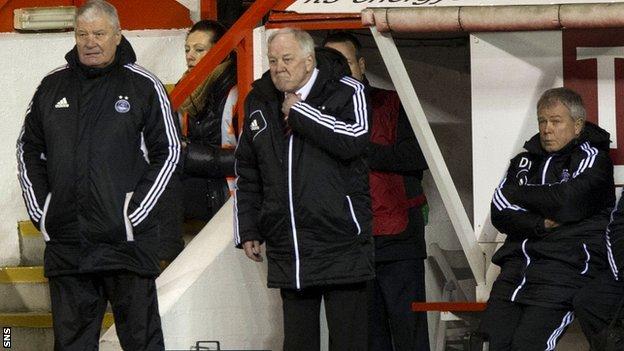 Aberdeen manager Craig Brown apologised to fans for his side's "insipid" performance in the defeat to Ross County.

"I have no excuse this evening," Brown told BBC Radio Scotland. "It's a one-off bad performance this year.

"We've lost games but we've not played as badly as that at home. I apologise to the fans because it was a weak performance."

It was Aberdeen's fourth defeat at Pittodrie this season.

"I'm not happy at all," continued Brown. "I thought it was a very poor performance from Aberdeen - one of the poorest we've had at home all season.

"We've only lost three home games prior to this one and on each occasion I felt we were unfortunate, but tonight we weren't unfortunate.

"We got what we deserved and we didn't play well enough.

"As the home team I expected us to do better than we did. One or two of the players that we expected things from didn't produce."

Niall McGinn had the home side's best chance midway through the second half in what was a dull Scottish Premier League encounter.

And Brown added: "Ross County came looking for a point and they got more than a point.

"They had that extra edge and determination. I'm very disappointed in our performance and very upset for the fans.

"We can only hope in the remaining games before the split we get a turn and play like we did against Kilmarnock on Saturday.

The Dons, currently eighth, now have four league fixtures left before the table splits into a top and bottom six.

"It's going to be very difficult having lost that game tonight because others will pull away from us," Brown said.

"But I'm a determined character and while there's life, there's hope.

"We've got 12 points to play for, and without question, there'll be a real attitude and determination to get as many of the 12 as we possibly can."