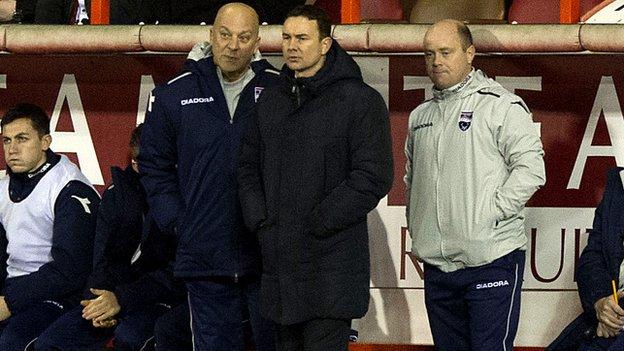 County are now level on points with second-place Caley Thistle, who they play in Dingwall on Saturday.

"We've had a lot of good games this season against Inverness," Adams told BBC Radio Scotland.

"We felt a little bit hard done by in the Scottish Cup game, so if we can go and win the match and overtake them, that's what we'd like to do."

Aberdeen have yet to win against Ross County, who are now nine matches unbeaten.

"It was a difficult game for us and it was an important win, it keeps us going," Adams said.

"[Aberdeen manager] Craig Brown said afterwards we deserved to win and that was nice.

"The pitch was slow, it wasn't the best game and there were not a lot of chances created.

"But it was a good finish from Gary Glen."

Substitute Glen's third goal of the season came in the 81st minute when he thumped home Steffen Wohlfarth's flick from Rocco Quinn's cross.

The striker had replaced Ivan Sproule, who was not too happy about being taken off, snapping angrily at Adams after getting a pat on the back on his way off.

"Ivan was sick before the game," added Adams.

"He wants to play in every match, obviously, but we've got an important game on Saturday and we want to have him ready for it."