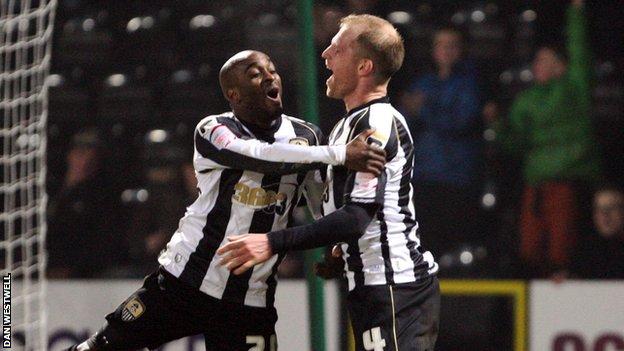 Notts County and Leyton Orient played out an enthralling draw, but it will not help either's faint play-off hopes.

Neal Bishop's emphatic finish put Notts ahead against the run of play, after the O's had an early Charlie MacDonald effort ruled out for offside.

Jimmy Smith almost grabbed an immediate equaliser, but his powerful drive smashed against the crossbar.

But after the break, Kevin Lisbie levelled from the spot after MacDonald was felled by ex-O's man Dean Leacock.

Lisbie's 11th goal of the season opened up the game as both sides looked to find a crucial goal to keep their fading chances of reaching the League One play-offs alive.

The visitors came close but Romain Vincelot headed harmlessly wide when in a fine position.

Jamal Campbell-Ryce seemed to be at the centre of most of the hosts' attacking play and twice forced Jamie Jones into smart stops, but his side could not find a winning goal.

The result leaves Notts County, who suffered a major blow when Manchester United loanee John Cofie was forced off with a nasty looking injury, seven points off the play-off places.

Leyton Orient, however, move up two places to 11th, two points behind their opponents.

"It was a disappointing first half but a better second half. If we want to get into the play-offs we need to win these kind of games.

"We defended too deep. We let them have the ball and they began to dictate the play and get closer and closer to our goal.

"We pressed them a little bit higher in the second half, took the game to them, had the better of the game and had some good chances."