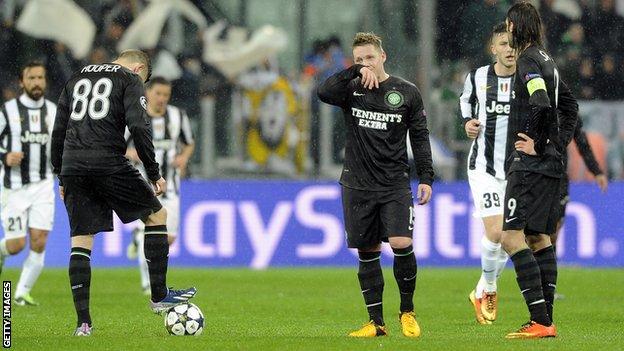 Gary Hooper almost turned in an away goal from Georgios Samaras' centre.

And Efe Ambrose wasted a header for the visitors before Andrea Pirlo and Arturo Vidal combined to set up Quagliarella for a simple finish.

Trailing by three goals from the first leg in Glasgow and without skipper Scott Brown, any faint hopes of a remarkable Celtic comeback ended on 24 minutes when Matri finished off from close-range.

Manager Neil Lennon will be frustrated that his side could not fashion a goal and by defensive lapses on a rain-lashed evening in Turin.

However, on reflection, Celtic can only assess their European campaign positively.

Seeded fourth in their group after two qualification wins against Scandinavian opposition, the runaway Scottish Premier League leaders finished second to Barcelona, whom they famously beat at Celtic Park, at the expense of Benfica and Spartak Moscow.

Without a win in nine previous trips to Italy, the visitors began brightly as both sets of supporters had the impressive relatively new stadium rocking with noise.

Celtic's hopes were still flickering, but they were soon extinguished.

Hooper was dispossessed on the touchline just inside his own half by Andrea Barzagli, who accelerated forward to play in Quagliarella.

The striker's low, angled shot through the legs of Kelvin Wilson was saved by Fraser Forster but fell into the path of Matri, who applied the finishing touch.

Far from feeling sorry for themselves, Celtic responded well.

Commons' drive was diverted on its way to goal by Hooper, but Buffon managed to change direction and make a sprawling save.

Samaras then flashed an effort across goal which Hooper was inches away from converting before Kayal headed weakly at Buffon.

A 20-yard drive from Juve's Chilean international Vidal worked Forster before the half-time whistle, and Quagliarella forced another smart save from the Celtic keeper early in the second half.

Ambrose, disciplined for his late arrival at training on the morning of the match, replaced the injured Victor Wanyama at the interval and the Nigerian produced a near carbon copy of his first-leg downward header miss from Charlie Mulgrew's corner.

And then the impressive Juventus machine clicked into gear on 65 minutes to settle the match.

In the closing stages, Samaras shot over from the edge of the penalty area and substitute James Forrest saw his effort from distance scooped up by Buffon as Celtic pushed fruitlessly for a goal to reward their considerable efforts over two legs.

Having revelled in the big match atmosphere of this campaign, Celtic will be back for another crack at the tournament next season and, although they will have to negotiate three qualifiers, Lennon's players will take great heart from this adventure.

But Celtic's form will not have gone unnoticed and richer clubs may be circling in the summer, with an eye on some of their star performers.