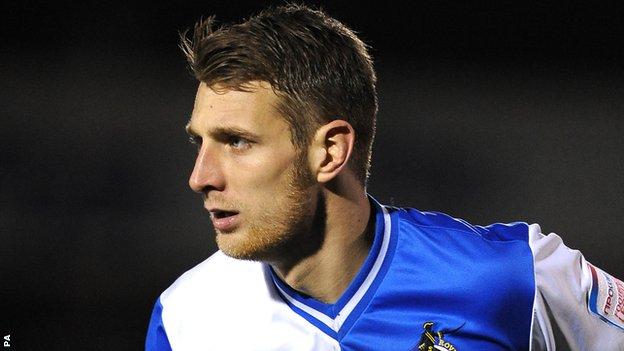 Bristol Rovers continued their rise up the table with victory over Exeter, who missed out on the chance to go third.

Goalkeeper Artur Krysiak was at fault for Rovers' opener, as he failed to hold on to Ollie Norburn's low drive and it slipped in to the net.

Exeter improved in the second half - with Scott Bennett shooting just wide from Craig Woodman's free-kick.

But Rovers rallied in the final 10 minutes, and Lee Brown netted a stunning 25-yard strike to finish it.

It means Bristol Rovers, who were bottom at Christmas, move up to 15th in the table, while play-off hopefuls Exeter remain sixth.

The hosts looked lively throughout - captain Tom Parkes headed just wide in the first half while Eliot Richards continuously troubled the Exeter defence.

And they took a fortunate lead when Norburn chanced it with a shot from distance, which fooled Krysiak and spilled through the keeper's hands and legs.

The Grecians enjoyed more of the possession after the break but struggled to find the target. Jake Gosling and Arron Davies both whipped in crosses but to no avail.

And Brown settled the game in spectacular fashion - finding space on the left-hand side and lashing home.